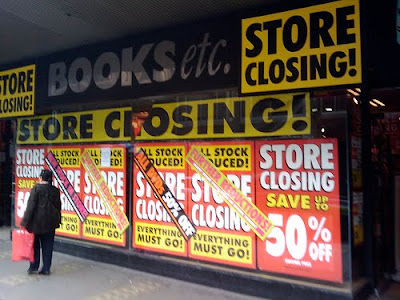 I've covered the rapid demise of America's brick-and-mortar bookstores several times here at TDS. Booksellers are now disappearing so fast that I wonder how long it will be before they vanish from the landscape altogether. It struck home for me again this past Sunday when, passing by my favorite Northern Virginia used bookstore, I was dismayed to see a big Going Out of Business banner hanging in the front window. I've been regular visitor to that particular store ever since it first opened in 1994, and most of the staff have worked there for many years. And now, just like that, poof--gone.

It shook me up enough that I decided to drive on over to the Barnes & Nobel location that is nearest to my house. I've never been a big fan of B&N because of how the chain drove so many mom-and-pop bookstores out of business, but other than the remaining used bookstores, they are about all that is left in Northern Virginia these days.

I hadn't been there in about six months, so I was very much relieved to see it was still open and actually had quite a few cars outside in the parking lot. When I went inside, however, there were changes afoot. Immediately inside the front door, right where the featured new releases used to be on display, was a brand new information booth where you could learn all about the Nook, and even take one of about a dozen display models for a test drive. Reacting as if a diamondback rattlesnake had just slithered into my path, I avoided eye contact with the two young salesgirls behind the counter and skirted around it as quickly as I could.

To my dismay, however, that wasn't the only change to the store. Literally about half of the space that used to contain books now no longer does. Instead, shelf after shelf was filled with toys and games and other useless crap that has absolutely nothing to do with actually reading. The non-fiction New Arrivals section had maybe a couple of dozen titles, whereas it used to occupy several bookcases and could take me a hour alone to browse through. The physical quality of the books that were present also appeared to have declined. The bindings these days are cheap, and even the hardbacks look they'll start to fall apart in just a few years.

Another distressing thing I noticed was just how shitty many of the titles were that were actually on the shelves. Celebrity biographies, teen vampire nonsense, self-help clap trap, romance novels and guides to spiritual living by teevee preachers seemed to be everywhere I looked, while serious works of either fiction or non fiction were in very short supply. Fittingly, in the bargain section there was one lonely copy of a cheapo hardback collection of reprinted classic short apocalyptic fiction stories that I almost bought just because of how perfectly apprpriate it looked sitting there on the shelf.

In the end, I merely grabbed a couple of deeply discounted titles because of how little there was that I actually wanted to read. The checkout clerk was a young guy probably not long out of college who was cheerful enough, considering, but when he asked me if I had a Barnes & Nobel membership card I had to restrain myself to keep from bursting out in a cynical cackle. No, I wanted say, but I'm good. I figure it's about a 50-50 chance at this point that your store will even still be here a year from now. Perhaps he knew what I was thinking, because when I merely said I did not have membership card, he didn't try to push one on me.

By the time I got home I was depressed. Despite what I write on this blog every day about America falling apart, I just can't imagine living in a world without bookstores. Sadly, that day is coming very soon. In fact, other than maybe making an occasional special trip to one of the two remaining independent booksellers down in the District of Columbia, visiting the bookstore has already almost become just a memory for me. It sucks.

Why are we as a culture in such a goddamned hurry to get rid of our physical books and replace them with these damn electronic readers? It's bad enough that the lingering effects of the recession were already killing the publishing industry.

You can't call it "progress," because that is complete and utter bullshit. We're maybe 20 years or so at best from the power grid breaking down on a widespread basis. So what happens to all those e-books then? They'll disappear into the ether, that's what. It's madness. But that's where we are as a culture these days.
Posted by Bill Hicks at 6:44 AM