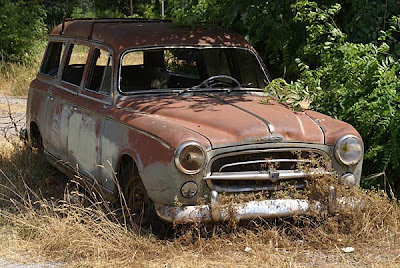 When people can't afford to buy new cars, they drive the ones they have for longer than they might have otherwise. As a result, the average age of the vehicle fleet rises. That's just common sense, as reported on Tuesday by North Jersey.com:


The average age of a car or truck in the United States hit a record 10.8 years last year as job security and other economic worries kept many people from making big-ticket purchases such as a new car.

That's up from the old record of 10.6 years in 2010, and it and continues a trend that dates to 1995, when the average age of a car was 8.4 years, according to a study of state vehicle registration data by the Polk automotive research firm.

However, despite the fact that gasoline prices have been over $3.00 per gallon for more than a year now, and many analysts expect it will top $4.00 or even more by this coming summer, hope still springs eternal in the auto industry:


However, Polk analyst Mark Seng says that a rebound in sales last year and expected growth for the next couple of years will likely lower the average age of cars as a whole in America. The aging of the American auto fleet has been a big boon for repair shops and companies that sell replacement auto parts.

In 2011, auto sales rebounded a bit to 12.8 million vehicles, especially in November and December, when sales were unusually strong. Last year, sales in the United States totaled 11.6 million. Many analysts expect this year to be better than 2011, anywhere from 13.5 million to more than 14 million vehicles. Even 14 million is still below what industry analysts consider a normal sales rate of close to 15 million per year, and far lower than the U.S. sales peak of 17 million sales that was reached in 2005.

I have proposition for Polk analyst Mark Seng. My prediction is that auto sales for 2012 will actually lag behind last year because of the continued high gas prices and the likely global economic slowdown. That's called reality-based analysis, rather than wishful thinking. So if I'm right, Mark, can I have your cushy job?


Addendum: There's nothing more gratifying than running acrosss another news story which confirms my post's thesis before I even hit the "publish post" button. Here is Bloomberg with a report that U.S. fuel consumption has sunk to the lowest level in 10 years:


Oil traded near a one-week low after gasoline stockpiles rose and consumption fell to the lowest in 10 years in the U.S., the world’s biggest crude consumer.

Futures were little changed in New York after slipping 0.2 percent yesterday. While crude inventories declined, gasoline use dropped to the lowest since September 2001, and supplies of the motor fuel increased to the highest level in 10 months, according to a report yesterday from the Energy Department. U.S. demand for oil products in the latest four-week period was down 7.2 percent from a year ago, according to Societe Generale SA.

“This is an ominous sign for the U.S. economy,” Mike Wittner, head of oil market research at Societe Generale in New York, said in a report dated yesterday. “Gasoline fundamentals remain weak. The market is anticipating firmer future fundamentals due to Atlantic Basin refinery closures. We are skeptical.”

It sure is, Mike. Sorry, Mark, but you might as well be wishing for unlimited unicorns and lolipops at this point.


Bonus: "I wish I was a messenger, and all the news was good"