Maybe the World Really IS Going to End in 2012 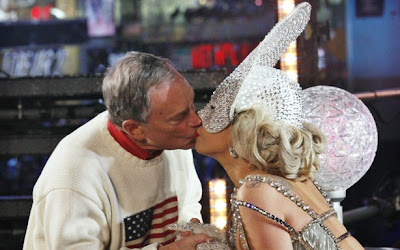 image: it's a little known fact the the picture above originally appeared on the last monthly page of the famous Mayan calendar

New Year's Eve, which I spent with my in-laws and a small army of nieces and nephews, was the last of three family gatherings for me this holiday season. All things considered, I made it through relatively unscathed. No major family arguments broke out and nobody got too wasted or acted in an overly inappropriate manner.

For me, the worst part was having to greet the new year by suffering through a couple of hour's worth of the most grueling of all the many cultural train wrecks on television these days, Dick Clark's New Year's Rockin' Eve, which my relatives insist upon watching every year. The producers of this hideous annual spectacle could hardly have done a better job were they TRYING to put together a lineup guaranteed to make me desperately wish for large pile of sharp objects with which I could poke out my own eyeballs, puncture my eardrums and then end the agony with an emphatic self-disembowelment. When about the least offensive person to appear on the screen the whole night is an American Idol host, you KNOW you're in for a long evening.

It's bad enough that they resurrect the mummified corpse of the eponymous host and prop him up in front of the camera every year. For about half a decade now, each time I've seen Dick Clark's decrepit form I keep saying this has GOT to be his last year doing the show. And yet the following year there he is again, looking ever more like his own caricature as designed by makers of the Spitting Image puppets from the rock band Genesis' famous "Land of Confusion" music video back in the mid-1980s.

This year we turned on the broadcast just in time to see Ryan Seacrest interviewing billionaire New York Mayor Michael Bloomberg. Bloomberg was in full "I'm just a regular guy" mode, wearing a cheesy white sweater with an American Flag embroidered on the front instead of the Brioni suit, Rolex watch and Testoni shoes you know the sonovabitch normally prefers to wear. Bloomberg, of course, is trying to repair his image after the (ahem) beating it took from siccing Officer Tony Baloney and his thuggish cohorts on the Occupy Wall Street protesters. But sacrifices have to be made, and forcing himself to dress up like one of the unwashed masses was just the first one Bloomberg would make on this particular winter evening.

Seacrest then threw the proceedings over to Jenny McCarthy for some totally insipid street level interviews with various clods who had been wasting their lives standing around Times Square the whole day waiting for their fifteen seconds of camera time. McCarthy, of course, is a former Playboy playmate who somehow thinks that getting famous by taking her clothes off means she knows more about medical science than the legions of physicians who have actually studied in the field. I wouldn't begrudge McCarthy for her persistent ignorance about the benefits of childhood vaccinations, but for the fact that she has somehow managed to convince a large number of other dimwitted Americans that she actually knows what she's talking about. How did Mike Judge ever manage to avoid casting her in the movie, Idiocracy, anyway?

As midnight approached, all of the "musicians," that had been playing in Times Square earlier in the evening joined Seacrest on the main stage for some inane blather about what the new year's celebration meant to them. I put the word musicians in quotes because other than utter has been Carlos Santana, none of the rest merited having the word attached to what it is they do for a living, particularly that little cougar-bait twerp, Justin Bieber. The highlight of this portion of the show was a "song" performed by the culturally omnipotent Lady Gaga, wearing some absurdly hideous costume that made her look like a mentally challenged space alien, and was, I gather, meant to detract the listener's attention away from the utter vacuousness of her actual performance.

But the highlight of the evening, or the lowlight if you prefer, came with the inevitable dropping of the big ball. Not that ringing in the new year itself is so bad, but did we really need to be treated to the nausea-inducing sight of Ms. Space Alien and Mayor One-Percenter in full lip lock? I know it was late, and all, but this was supposed to be a family show and we had impressionable young children in the room with us.

Almost as bad was the subsequent image of the aforementioned over-the-hill centerfold for some bizarre reason playing tonsil hockey with a recent New York City police academy graduate. I half expected McCarthy to say, "That was just a reminder, Big Boy, of what exactly it is you'll be protecting the first time Boss Bloomberg calls you out to put a few uppity Occupy protesters in their proper place. Oooh, hey, is that your retractable baton right there, or are you just happy to see me?"

A few minutes after midnight, a collection of talent-free cretins called LMFAO then took the stage. When the live audience didn't take their band name literally and actually started to get into the alleged music, I excused myself for the evening and went upstairs to hit the rack. As I did I reflected on the fact that the only good thing about starting off the new year by observing such an awful spectacle is now it really has nowhere to go but up.


Bonus: "Because this is the world we live in...and these are the hands we're given"