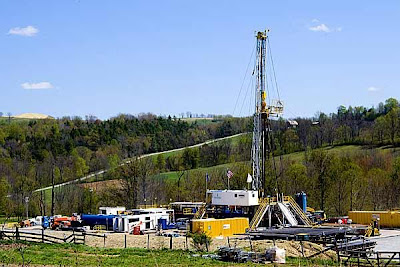 Okay, so technically the recent earthquakes in Ohio were not the result of fracking, but check out the key passage in this USA Today article about the quakes:

Ohio officials closed four inactive "fluid injection" wells within a five-mile radius of the Youngstown well, which is near a fault that geologists apparently weren't aware of. Pressure from the wastewater caused the fault to shift.

Northstar Disposal Services has used the wells to dispose of brine wastewater from shale oil and gas drilling, which officials said is different from so-called fracking, the Youngstown Business Journal and AP report.

Despite the disclaimer, The Christian Science Monitor writes that the disposal wells -- and the earthquakes -- are related to fracking, or hydraulic fracturing ("How fracking caused an Ohio earthquake").

The seismologist interviewed by the AP, John Armbruster of Columbia University's Lamont-Doherty Earth Observatory, said more minor shakes can be expected throughout 2012.

"The earthquakes will trickle on as a kind of a cascading process once you've caused them to occur," he said. "This one year of pumping is a pulse that has been pushed into the ground, and it's going to be spreading out for at least a year."

"...which is near a fault that geologists apparently weren't aware of..." in other words they were tampering with the geology of a potentially unstable area and had no idea about the risks they were taking. If they had no idea this fault line was there, how many other fault lines in potential fracking zones around the country do they have no idea about?

What is it going to take to stop this insanity, the accidental triggering of a major earthquake in a large metropolitan area? And before you scoff and say that can't happen, I would simply ask this question: how do you know? The science of earthquakes is still not well understood and they have yet to be predicted with any degree of accuracy. For all we know, every day that fracking and other injection techniques being used to extract oil and natural gas is placing us at risk of a major catastrophe. Do you want to be living in the area where the fracking equivalent of the Deepwater Horizon disaster takes place? Because I sure don't.

We should stop this madness once and for all and accept the fact that extending our fossil fuel supplies by a few years is not worth the risk of touching off a major earthquake, especially since we are eventually going to be forced to power down one way or another. But of course we won't. We're on a highway to hell, barreling at top speed with the brake line severed.