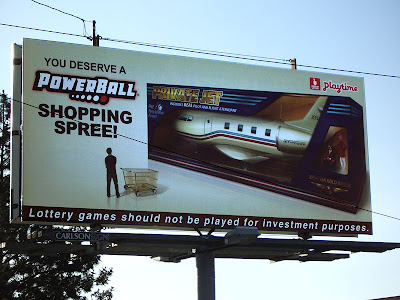 In the interests of full disclosure, I should start this post by stating that I have never once in my life bought a lottery ticket. These government run gambling entities are even more tilted in favor of the house than any Las Vegas casino. For most of them, half of the collected revenue is taken right off the top in taxes, and I already pay enough money in taxes, thank you very much.

It's a good bet that the economic downturn is hurting the bottom lines of the state lotteries as people find themselves with less spare cash to blow on lottery tickets. To combat this phenomenon, the Powerball lottery has come up with a rather baffling solution, double the cost of a ticket. Here is Yahoo News with the details:


Get ready to pay more for Powerball: Ticket prices are going up to $2.

Lottery organizers hope the price change will entice more people to play because jackpots are getting bigger and the odds of winning are improving.

Because raising the cost of your product by 100% during troubled economic times is ALWAYS a sure fire way of increasing sales. You would think that would be obvious, but apparently is isn't to the morons who are running the Powerball lottery, as shown by this quote:


Lottery officials say they are betting players will like the variety and changes made in the game. But some players say the price increase may keep them from playing as often or not at all.

The real problem, of course, is that the lottery is being run by a bunch of well-to-do twits who can't fathom why a mere extra dollar in cost would deter people from buying their product. After all, they themselves have plenty of extra dollars lying around. I suspect that what they really need to do is spend a couple of hours sometime hanging around at a shabby convenience store observing the broken down state of many of the people who actually buy lottery tickets. Then they might understand that not everyone in America has spare dollars just falling out of their fucking pockets. But of course they'd never condescend to do anything like that.