The Truth is in the Housing Sales Numbers, Not the Stock Market 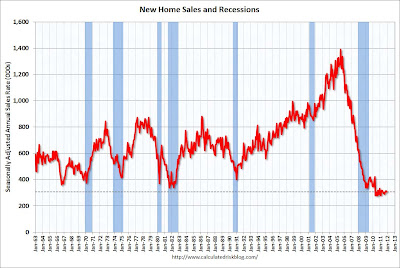 It should be evident by now to any observer who has more than two brain cells to rub together that the stock market has for nearly three years been pumped up by the Federal Reserve in order to create the illusion of an economic recovery that just does not exist in reality. But while the Fed's easy money policies have given the big banks and Wall Street the liquidity they need to drive up the price of stocks (and other asset classes) from their March 2009 lows, what they haven't done is put money back in the pockets of working and middle class people. Consumers may still be whipping out the plastic to buy cheap crap from China in order to make themselves feel more prosperous than they really are, but when it comes to the biggest ticket item of all, housing, as the chart above from Calculated Risk shows, the country remains mired in a deep depression.

In fact, here are a couple of very telling quotes from two different posts Calculated Risk made on the subject last week:


In December 2011, 21 thousand new homes were sold (NSA). This was the weakest December since this data has been tracked, and was below the previous record low for December of 23 thousand set in 1966 and tied in 2010. The high for December was 87 thousand in 2005.

That's right, we just had the worst year ever for new home sales, and December, despite all of the hype regarding holiday retail sales, was the worst month of the worst year ever. And this happened, we must remember, at a time when rates for a 30-year, fixed rate mortgage have fallen BELOW 4%.

Buying a home has always been, and remains, at the very heart of the American Dream. If people could still afford to buy real estate, especially at these mortgage rates, they would. The fact that they are not speaks huge volumes about the real state of the economy, despite the rise of the manipulated stock market.

The media has been hyping up the fact that the weekly unemployment claims numbers have fallen and that the monthly jobs data has shown a steady, if still sluggish increase in employment over the last year. The question they never ask in following up is: what kind of jobs are these that are being created? Are they higher paying jobs that provide the employee with a ticket to the middle class which will allow them to live the dream and buy their own home? Or are they menial, near minimum wage paying retail and service sector jobs that keep one on the edge of poverty and buying a house well beyond their means? The housing sales statistics seem to strongly indicate the latter.

Unless and until we start to see a real and sustained upturn in the number of homes being purchased, I think we can safely say that the rhetoric about economic recovery is nothing more than lies and propaganda spewed forth by a media machine of behalf of it's ever increasingly desperate masters.


Bonus: "I'm homesick for the home I've never had"