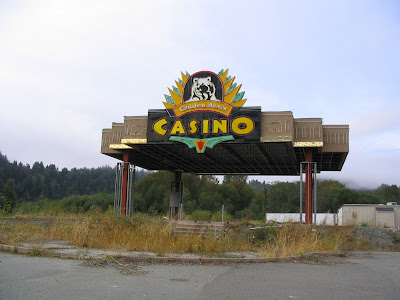 I've posted several stories here on TDS about recent decline of the gaming gambling industry in the United States as the throngs who used to fill the casinos find themselves unable to come up cash to throw away on the slots or at the Blackjack table. And yet despite all of the evidence that the industry is in deep trouble and no longer the cash cow it used top be, there are still plenty of localities lining up, hoping to boost tax revenues by overcoming their previous resistance to legalizing gambling and opening casinos of their own. MSNBC has the details:


A Malaysian company's plan to build a $4 billion convention center and big-time casino on the outskirts of New York City could be the biggest shot fired yet in a tourism arms race that has seen a growing number of Eastern states embrace gambling as a way to lure visitors and drum up revenue.

New York Gov. Andrew Cuomo announced last week that he would work with the Genting Group, one of the world's largest and most successful gambling companies, to transform the storied, but sleepy, Aqueduct horse track into a megaplex that would eventually include the nation's largest convention center, 3,000 hotel rooms, and a major expansion of a casino that began operating at the site in October.

The proposal came less than two months after once-puritanical Massachusetts passed a law allowing up to three resort casinos, plus a slot machine parlor, at locations around the state.

Ohio is poised to see its first commercial casinos open this year, after voters approved up to four gambling halls in 2009. Maryland's first casino opened last year, with more on the way. Pennsylvania's first casinos opened in 2006, and already the state is threatening to surpass Atlantic City as the nation's second-largest gambling market.

And in Florida, lawmakers are hotly debating a whopper of a bill that would allow up to three multibillion-dollar casinos, plus additional slot machines at dog and horse tracks. Genting appears confident the law will pass. It has already spent around $450 million to acquire waterfront property in Miami, where it wants to build a $3.8 billion complex that would include a casino, dozens of restaurants and a shopping mall.

States have embraced casinos, after years of trepidation about their societal costs, for two simple reasons: a promise of a rich new revenue source, plus the possibility of stimulating tourism.

The article itself actually does a very good job of raising questions as to whether this latest desperate revenue grab by the state governments is at all advisable:


Some experts, however, have questioned whether revenue bonanzas that large are realistic, and say states should be cautious about giving up too much to lure these projects. Competition for a limited pool of gambling and tourism dollars is already fierce, and recent years haven't been kind to casinos.

Nevada's larger casinos lost $4 billion in 2011, according to a report released this month by the state's Gaming Control Board, as the state continued to feel the effects of the global economic slump.

As gambling options have increased in the East, revenue has slid substantially at the pair of Indian tribe-owned casinos in Connecticut and declined by a dramatic 30 percent in Atlantic City, which has lost customers in droves to the new casinos in nearby Philadelphia, according to David Schwartz, director of the Center for Gaming Research at the University of Nevada Las Vegas.

So the latest players in the legalized gambling game plan to spend billions of dollars to spread the wealth that much thinner even as the slowly collapsing economy continues to squeeze the mass of players suckers they need to be able to make a profit.

How much more proof do you need that the so-called "leaders" of our society are completely out of ideas and have resorted to merely shuffling the deck chairs on the titanic?


Bonus: Wait a minute, is that music I hear on the promenade deck?