Death Be Not Proud: Indiana Casket Company Lays Off 100, May Shut Down 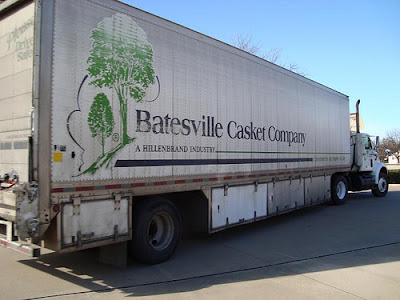 The continuing effects if the Great Recession are being felt in all industries as financially strapped consumers cut back spending. And now there is evidence that it is even following people right into their graves. Here's a local Indiana television station with the gory details:

FOX19 spoke with two employees facing pink slips who wanted to remain anonymous but say they were expecting the move.

"We all knew this day was coming we just didn't think it was coming this soon," says a 13-year veteran utility worker.

This story actually fascinated me because it has a bunch of different aspects to it beyond just the usual sad tale of people being laid off. First up, the corporate FlackSpeak:


The company explained the cuts, "As part of our continuous process of maximizing production capabilities to meet the needs of our customers."

So exactly how do you "meet the needs" of dead people, anyway? I'm just curious.

Sorry, I'm being a smart ass again. Bad habit of mine. Please continue:


"As longstanding members of the Batesville community, we continue to make investments in our manufacturing facilities and in innovative, growth-oriented products and services that give families more ways to honor their loved ones."

There they go again with the up is down, black is white, left is right and day is night bullshit. No, fuckheads, you are cutting production, which obviously means there will be fewer ways for families to "honor their loved ones."

But beyond that nonsense is the story of a community facing severe hard times:

The cuts, she says, already has people talking about shutting down the entire plant, a move that could severely impact the entire town.

"It is what makes Batesville, if Batesville Casket were to shut down it would be a ghost town," she says.

Must. Not. Laugh. At. Unintentional. Pun.

The biggest problem here, of course, is that caskets these days cost too damn much money. I just did a quick Google search and found a casket price list where you can procure a box for your dearly departed for anywhere between $1,200 and $6,000. When you include the cost of the funeral service itself, the preparation of the corpse and the cemetery fees, that quickly adds up to being beyond the means of the average family. Back when times were good, people were willing to pay such a (ahem) stiff price because of the emotional blackmail used on them by the funeral home industry to sell its products. But when people are broke, those kinds of appeals become less effective.

I've joked around with my wife that should I pass on before she does she can just put my body out with the trash. I mean, I'm dead, so what do I give shit about my empty vessel being buried in some hole under a stupid headstone? I'd much rather be cremated and have my ashes spread in some field where they could help fertilize the crops, or something. As the Rodney Dangerfield line from Caddyshack so memorably stated it, "cemeteries and golf courses are the two biggest wastes of prime real estate."

Face it folks, the mortuary business is yet another unnecessary luxury in the era of peak oil-induced economic contraction--just another economic (ahem) zombie where the body hasn't stopped twitching yet.


Bonus: A beautiful noise the dead will never hear