Hey, Senator Inhofe, It Was 67 Degrees Fahrenheit in DC Yesterday 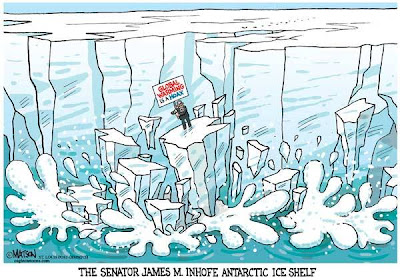 Back on August 19th of last year, I posted a Friday Rant called, "Hey, Senator Inhofe, It's HOT Outside," in which I called out the senior Senator from Oklahoma for his family's dumbass publicity stunt of building an igloo during one of the blizzards that struck DC two winters ago in order to mock Al Gore and others who are concerned about climate change. Specifically, I blasted the global warming denying Inhofe for not subsequently acknowledging this past summer's record breaking heat wave in The Sooner State:


So to recap, Okalahoma's record for the highest monthly temperature ever recorded was just smashed by an astonishing one full degree Fahrenheit. And yet, there was nary a peep about it from the esteemed Senator Inhofe and his merry band of inbreds.

All of this almost makes me wish I lived in Oklahoma. During July I would have had this very strong desire to go find Senator Inhofe's house, wait until about four o'clock in the afternoon, and then break open a couple of eggs and fry them right on his front walk. Then I would have held up my own sign for all passersby to see: "Pray for Cooler Weather...Maybe that Will Help."

Well, guess what? After Oklahoma suffered through a summer season right out of Dante's Inferno, the locale where the "Honorable" Senator Inhofe spends the lion's share of his time is literally going through a year without a winter. We've had exactly one truly cold night so far here in the DC area during this non-winter of 2011-2012, just this past week when the temps dipped into the teens. Other than that we've had maybe three or four nights when it has been below 30 degrees, and the current 10-day forecast is for more of the same through mid-January.

Yesterday, the mercury soared all the way to 67 degrees, and it felt more like early May than January. Even more pertinent is a factoid I read just this past week that DC has not experienced a temperature reading below zero degrees Fahrenheit since 1994, which is astonishing since before that time it was not all that uncommon an occurrence during the coldest months of the year.

So what I want to know is what does Senator Inhofe's family have to say about this run of extremely warm weather we are now experiencing? The silence on that front has been deafening. If you're going to be assholes whenever there is a snowstorm, you're setting yourself up for this kind of criticism. Even at the time their little publicity stunt was monumentally stupid because despite the fact that DC experienced three major winter storms two years ago, each time the temperatures rebounded into the 30s and 40s almost immediately afterward rather than going into a deep freeze, which used to be the norm.

I guess it's true what Stephen Colbert told George Bush the Lesser years ago at the White House Correspondent's Dinner: reality does have a well known liberal bias.