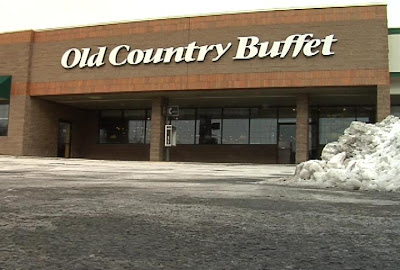 Back when I was in college, I ate dinner at the Old Country Buffet a few times. The food was cheap, and there was a lot of it. A perfect night out for a college student on a limited budget, in other words. A few years ago, I stopped at one for old times' sake and was very sorry I did. There was still plenty of food, but nearly all of it was virtually inedible. I don't know if it was because my palate has become more discriminating over the years, or if they've kept their prices low by ordering cheaper and cheaper ingredients, but it was an awful dining experience.

Nevertheless, I realize that a visit to the OCB or a Ryan's restaurant is what constitutes a great night out in many parts of the country. So this story from the Minneapolis/St. Paul Business Journal seems rather important:


Buffets Inc. said Wednesday it has filed for Chapter 11 bankruptcy and plans to close 81 restaurants nationwide — the second time the company has filed for reorganization in four years.

So, what's the story, morning glory?


Buffets emerged from its first bankruptcy in April 2009 after shedding $700 million in debt. Riggs said the company decided to file again because of lease restrictions that limited the number of locations it could close in the 2008 filing. He also said the recession has hurt the chain badly over the last four years.

And, given that Buffets caters to that segment of our society that is hurting the most from the lingering effects of the Great Recession, it's not going to get any better.
Posted by Bill Hicks at 6:55 PM