Welcome to the Fifth Year of The Long Emergency 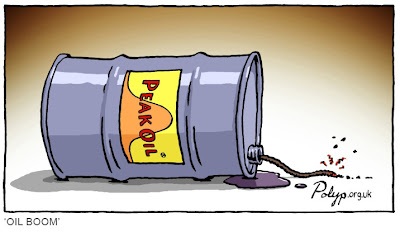 Let me start my first long post of the New Year off with an admission. Four years ago at the beginning of 2008, when I first became aware of peak oil and really began to understand the dire implications for our modern industrial society, I never would have expected to be sitting here four years later writing about how amazing it is that somehow business as usual continues to hold together. Back then, if you’ll recall, oil prices were just hitting triple digits for the first time, and dire prognostications abounded claiming that very shortly oil would surpass $150 or $200 or even $300. Ten dollar a gallon gasoline was said to be just around the corner, and with it would come the very quick collapse of our consumer economy.

As we all know now, the more extreme scaremongering predictions did not come to pass. The closest we came to a fast collapse was in September 2008 with the demise of Lehman Brothers and a stealth worldwide electronic bank run. The powers that be apparently acted just in time to “save” the system, and since then have been doing everything they can to prop up the façade of business as usual. As it turned out, author James Howard Kunstler was very astute to label the crisis, “The LONG Emergency.”

It is pretty clear looking back with hindsight that whatever pressures were building up before then, The Long Emergency really began with the start of the Great Recession at the beginning of 2008. As such, we are now entering the fifth year of a peak oil crisis that I expect will take at least a generation to fully play out. It is helpful, I think, to look back on the events of the past four years so that we might better develop an understanding of where we are headed and when. In that spirit, I have put together a brief summary with labels for each year as it has played out. Some might say that a calendar year is an arbitrary measurement of time and giving each one a label is superficial, but I’ll have to beg your indulgence on that one.

So without further ado:

2008 – The Year of the Crash: Most people when they think of 2008 from an economic standpoint think of the stock market crash of that year which was triggered in part due to the skyrocketing of oil prices to $147 a barrel in July. The resulting financial crisis was the first huge peak oil related shock wave to hit the global economy, signaling to America and the world that we are collectively approaching the point in which natural limits are going to make continued real economic growth impossible. Of course, the message went unheeded, partly because oil prices crashed even more dramatically than the stock market did, returning briefly to the $30 range early the following year as the Great Recession wreaked widespread havoc.

2009 – The Year of the Bailouts: The massive response of the elites to the crash of 2008 was, of course, to bail out the “too big to fail” financial institutions worldwide and to have central banks pump as much liquidity into the system as possible. The strategy “worked” in so much as it arrested the free fall of the economy. After bottoming out in March, the stock market began to rapidly bounce back. The massive hemorrhaging of jobs, which peaked around the time of the stock market low that year, continued for quite a bit longer, creating an historic drop in employment which would bedevil the economy for many years to come even if peak oil were not an issue. Bailouts were also given to more traditional businesses like the automobile industry, and the federal government ramped up spending for Obama’s stimulus package, among other expensive programs, to the point where the annual federal budget deficit tripled from its previous all time high set just the year before.

2010 – The Year of the “Green Shoots”: As Obama entered his second year in office, the economy had at least stabilized to the point where politicos and members of the mainstream media could plausibly go on teevee and proclaim that there were “green shoots” springing up that represented the beginnings of a real economic recovery. Obama and the Democrats, in fact, felt confident enough to enact the massive corporate giveaway program known as Obamacare. The stock market continued its rebound, fueled by the zero interest rate and quantitative easing policies of the Federal Reserve. The employment situation also stabilized after two full years of relentless job losses. All was not well, however, as the Tea Party protests rose to a crescendo that summer and Obama and the Democrats suffered a massive defeat in the mid-term elections due to continued economic stress being felt by average Americans, and an “enthusiasm gap” felt by many of his supporters who felt he had rescued Wall Street and the big banks at their expense.

2011 – The Year of the Protests: Sure enough, the discontent with the economy finally exploded not just in the United States, but all over the world. Rising food and energy prices, caused in part by loose central bank monetary policies, particularly those of the Federal Reserve, helped touch off protests throughout the Middle East early in the year that toppled long standing autocratic regimes in Tunisia, Egypt and Libya. By September the protests had spread to America with the rapid explosion of the Occupy movement, fueled by the discontent of young adults who felt they had been robbed of their futures during the crisis. Oil prices shot back up into the triple-digit danger zone, once again threatening the consumer economy. Meanwhile, Europe lurched from crisis to crisis as a number of countries, led by Greece, slowly drowned in an ocean of sovereign debt. Back in the U.S. the political system showed signs of coming completely unglued, with repeated government shutdown threats, the threat of a politically motivated sovereign default and a Republican presidential campaign field full of candidates who seemed completely detached from any kind of reality.

And that brings us to the present day in which the world economy seems to be once again teetering on the brink, and the threat of massive widespread unrest and even resource wars are omnipresent. When we look back a year from now at the 2012 just unfolded, what will we say was the dominant theme of year five of The Long Emergency? Might it be the Year of the Default as the Eurozone finally implodes? Or perhaps it will be the Year of the Street Violence as the rage fueling the protests in America finally begins to resemble genuine mayhem that occurred in so many U.S. cities in the late1960s. Or perhaps it will be something else entirely that few if any of us are currently anticipating, like the worldwide protests that were about to break out starting at this time last year.

Whatever happens, it’s already been a long, strange trip four years into The Long Emergency.


Bonus: Okay, I keep quoting from this song so it's time I finally posted it