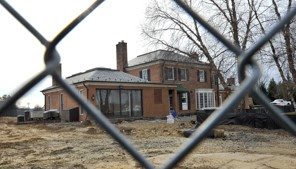 image: A huge salary and a free house (pictured) apparently isn't enough for the president of the University of Maryland

Back on November 26th, I posted a story called, "Sign of the Times: University of Maryland Cuts Eight Sports Programs to Save Money," which documented how the university was forced for budgetary reasons to make cutbacks in a number of its sports programs. As it turns out, non-revenue generating athletics at the university may be considered an unnecessary expense in these times of austerity, but that isn't stopping it from blowing more than (cue Dr. Evil) seven MEEELION dollars for fancy new digs for the university president. Here is the Washington Post with the details:


Construction crews are poised to demolish the president’s house at the University of Maryland this week and to pour the foundation for a new 14,000-square-foot on-campus mansion that carries a $7.2 million price tag.

But some question why the school would build such an elaborate house at a time when the flagship university is asking donors to support students who might drop out because they can’t afford tuition. And construction will begin just weeks after President Wallace D. Loh announced that he will cut eight varsity sports teams in June to save an estimated $29 million over the next eight years.

Yeah, that's certainly a question I would be asking if my kid were taking out student loans to pay the insanely high cost of tuition at the University of Maryland. So what's the explanation for building a ritzy new palace for the university's top dog?


University leaders say the school has a dire need for the new facility, which is designed to woo supporters and attract major donations at a time when state funds make up less and less of the overall budget. They say the bill will be picked up by about 30 private donors — not students or taxpayers — and will pay huge dividends. It also will replace a building plagued with problems.

The university will continue to pay for general upkeep and utilities for the mansion, which will be more than twice the size of the current home and will have dedicated entertaining spaces.


Because nothing would make me open my checkbook faster than seeing a clear demonstration that the university's "leadership" believes wasting millions of dollars on such frivolities is a higher priority that spending it on actual education programs for the students. Care to give us a few more details as to what you people were thinking?


“There’s never going to be a good time; it doesn’t matter what the economy is like,” said Brodie Remington, president of the University of Maryland College Park Foundation and a vice president at the school. “This is a good investment.”

Remington said the foundation’s trustees decided it would be easier to rip down the house and start fresh.

The “University House” is scheduled to open this fall and will have two distinct sections: One wing will contain a 4,000-square-foot private residence with four bedrooms that will cost about $2 million. The rest will be a 10,000-square-foot “events center” with a grand foyer, public living room, catering kitchen, office space, a formal dining room for small parties and a large hall that can seat 125. That section will cost $5.2 million.

Loh currently lives in a house he purchased near campus, and it’s unclear if he will relocate. Two university spokesmen declined to make him available for an interview.

“We’re not sure. That will be his choice entirely,” Remington said.“The facility is primarily for events.”

Unlike other entertaining venues, Remington said visiting the president’s house can elicit emotions similar to those felt when receiving an invitation to the White House, governor’s mansion or a friend’s home. “We informally call it the ‘power of the house,’” he said.

Oh, so your logic is that in order to get one-percenters to donate to your university, you have to have your president living like one of them. I got it now.

It seems to me that there is another way of looking at this abomination...that it instead sends the message that the senior leadership of the university only cares about their status and perquisites, and couldn't give a flying fuck whether the students who are impoverishing themselves to attend classes there wind up with an education that is worth anything more than the paper it is printed on in the real world. But maybe that's just me.


Bonus: But hey, maybe with a University of Maryland degree a graduate can become a really awesome street musician