Pat Buchanan: Shooting the Message Along With the Messenger 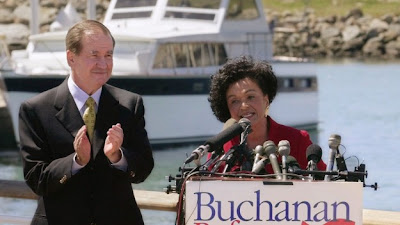 image: Pat Buchanan's running mate from the 2000 presidential election might not be from the demographic you would have expected

A lot of liberals and progressives were gloating this past week that longtime political commentator and 2000 Reform Party presidential candidate Pat Buchanan has apparently been suspended indefinitely from his pundit gig at MSNBC after writing some racially insensitive (at best) passages in his latest book. The ousting of Buchanan is actually quite reminiscent of the severe criticism current Republican presidential candidate Ron Paul is taking for similar writings that appeared in his weekly newsletter 20 years ago. Both Buchanan and Paul are old white guys who have been very successful in life and have never known what it’s like to have to overcome prejudice or people automatically dismissing you because of your race. Therefore, by treading into the rhetorical territory of speculating whether Americans of European ancestry, who have absolutely controlled and dominated the country’s culture and politics since the founding, are getting a raw deal because those of other races have made huge progress in closing those gaps, they have demonstrated their utter cluelessness on racial issues.

Before liberals and progressives get too cocky in denouncing Buchanan, however, they should pause for a moment and make sure they aren't just mindlessly dog piling on someone who actually does have some ideas they ought to be in agreement with. The biggest issue I have with the criticism leveled against Buchanan and Paul from the left is that they are often lumped together with the true know-nothings and troglodytes like Sarah Palin, Michelle Bachmann, Rush Limbaugh and Rick Santorum. For a group of people who often loudly denounce the opposition for its supposedly simplistic, black and white worldview, this shows a remarkable predilection to do exactly the same thing.

Ron Paul’s biggest attraction as a candidate, and what generates passionate support among many of his supporters, is his strong and consistent antiwar stance. Indeed, the aforementioned Rick Santorum even criticized Paul recently for having the same foreign policy positions as Dennis Kucinich, as if that’s supposed to be an insult. I first became aware of Paul back when he was regularly writing editorials for Antiwar.com against unfettered American militarism as George Bush the Lesser was still riding high in the polls and the Iraq debacle had yet to lose public support. But guess who was right there along with him, and in fact probably wrote more articles for Antiwar.com during that time period than Paul? That’s right, Pat Buchanan. Say what you will about Buchanan’s latent racism, at least he is not prepared to exercise it with a drone missile.

Buchanan has also been one of the lonely voices out there in the wilderness, especially on the right, decrying the so-called “free” trade agreements that have utterly gutted the American working class and are now wreaking havoc on the middle class as well. Not only was free trade and opposition to NAFTA an issue Buchanan wielded against Bob Dole when he challenged the hatchet man from Kansas for the 1996 Republican presidential nomination, it was also what allowed him to secure the Reform Party nomination four years later after Ross Perot had faded from the scene.

So here you have a prominent antiwar voice, who also opposes at least one of the major economic policies that is impoverishing the 99% on behalf of the 1%, and yet he is still being treated on the left as if he is no better than Dick Cheney himself. It almost makes you wonder if the outrage against Buchanan is genuine, or whether it is at least partly generated by the guilty knowledge that on these critical issues Buchanan is far preferable to many of their own so-called “leaders,” most particularly President Hopey-Changey and his warmongering Secretary of State. One is black, of course, and the other is female, but that doesn’t in any way make their slavish devotion to big business, war and empire any less odious. In fact, what it proves is that given a chance, minorities and women are just as capable of perpetrating monstrous policies on behalf of the elites as any old white guy.

It is so typical in the public discourse these days to use one particular comment or policy position of a prominent individual in order to utterly discredit them across the board as if, unlike any other person you could name, they cannot be right about some things and wrong about others. Think about someone in your own life with whom you share a similar mindset. Do you agree with them completely on every single issue? Because if you do that is, in my experience, an extremely rare circumstance. It’s unfortunate that it is so hard to find liberal and progressive commentators and politicians whose stance against globalization, militarism and imperialism is as strong and unwavering as Pat Buchanan’s, but the fault there lies with the fact that so many people on the left choose to support complete sellouts rather than people with actual principles.

The fact is you can split the politicians and the punditocracy into two different categories, those who have been completely co-opted by the corporatocracy and those who have not been. Pat Buchanan and Ron Paul are actually two of the rare examples of those who bravely stand in the latter category. Do they deserve to be criticized for their more odious pronouncements and positions, particularly about racial issues? Sure they do. But before accepting any such criticisms at face value, one must always consider who it is who is leveling the criticism and whether they themselves are on the other side of that cavernous divide between those who speak for the 99% and those who do so for the 1%.


Bonus: My man Louis CK has a much more palatable way than Pat Buchanan of saying how great it is to be white