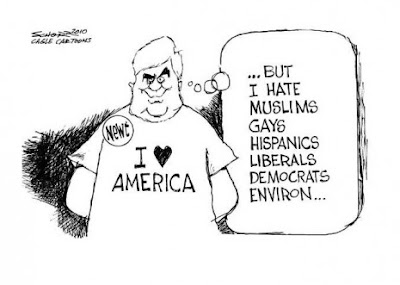 The already chaotic race for the Republican presidential nomination was thrown into even more disarray last Saturday when Newt Gingrich destroyed Mitt Romney in the South Carolina primary. The last time a politician from Massachusetts got beaten that badly by a South Carolinian was in 1856 when abolitionist Senator Charles Sumner was left for dead on the Senate floor by pro-slavery Representative Preston Brooks. Just when it appeared that Romney was clearing the field on his way to securing the nomination, the Everybody Hates Willard conservatives shook things up by rallying around the standard of the bomb throwing huckster from Georgia with the Stone Mountain-sized chip on his shoulder.

It remains to be seen whether the Newtster can capitalize on his Palmetto State victory and pull the upset over the plodding and clueless Bay State oligarch the Republican "leadership" had grudgingly settled on as their preferred standard bearer. Personally and perversely, I am now rooting for Gingrich to move in for the kill. No other politician today so perfectly embodies the rot and decay that has slowly gripped our political system over the past 30 years as America has descended into unrepresentative corporatocracy. The man will say and do ANYTHING to achieve and maintain power. Just look at how he was willing to play the populist card to attack Romney's Wall Street record despite the traditional slavish Republican support for big business.

Gingrich actually combines the very worst elements of so many other recent national Republican politicians. He has Nixon's thirst for vengeance against his political enemies and contempt for the rule of law, Reagan's ability to connect with "values" voters despite being a divorcee and a moral train wreck, Cheney's neoconservative belligerence and desire to assert American hegemony throughout the world, George Bush the Lesser's open contempt for the Constitution of the United States and Palin's ability to pull the emotional chords of his dimwitted followers and masterfully play the victim in the media. Add it all up and you have the man who most clearly resembles author James Howard Kunster's "Corn Pone Hitler" for America.

The ever feckless Democrats are, of course, cackling with glee at the idea that the Angry Little Attack Muffin (as conservative pundit Peggy Noonan has so memorably labelled him) could actually snatch the prize right out of Willard's jaws and end up being President Hopey-Changey's opponent this November. Indeed, the so-called "smart" money in Washington is now betting overwhelmingly on Obama being reelected. Democratic "leaders" around the country are no doubt giddily blocking off days in their appointment calendars for the middle of next January in anticipation of attending another series of tiresome inauguration parties.

All I can say to those prematurely celebrating Democrats is: be careful what you wish for. I absolutely agree that if the administration can manage to kick the can representing the next inevitable crash in the financial markets past November 6th, Obama is a shoo-in to be reelected. It might get a bit ugly with massive Occupy protests at the Democratic convention in Charlotte this summer, and his base will be supporting him more out of fear of a Republican victory than because of any enthusiasm for the way he has repeatedly kicked them in the nuts during his first term, but under the current economic conditions the race is his to lose, however much he deserves to.

But what if the administration miscalculates? After all, the previous occupant of the Oval Office also tried to keep things propped up past election day to help the prospects of his party's nominee to be his successor but ended up falling about two months short of that goal. In the wake of John McCain's disastrous campaign, we tend to forget that right before the September 2008 market crash he was surging in the polls and had almost drawn even with Obama. Would the cranky curmudgeon from The Grand Canyon State have defeated the Mighty O had stocks waited a few more months to make like Lindsey Lohan's acting career? We'll never know for sure, but there was at least a decent possibility.

If the market crashes again in 2012, the Occupy protests will reach a fever pitch and the outrage across the country is going to turn white hot. Tens of millions of voters will be looking for someone to punish, and Obama will be the most visible target of their ire. It won't matter then how flawed Newt Gingrich is as a candidate. His greatest advantage will be in being "not Obama." A number of pessimistic stock market watchers believe the next crash will take stocks below their March 2009 lows. The political mathematics of that scenario playing out are really very simple: Dow 6000 = President Gingrich (or Romney if the latter manages to hold on).

So what would a Gingrich presidency be like? Well, for starters if you take him at his word from some of the more ominous things he has been saying on the campaign trail, war with Iran and massive economic chaos from a disruption in Middle East oil supplies would seem to be an inevitability. The former Speaker of the House of Representatives has also said he would ignore Supreme Court rulings he doesn't agree with and would purge "politically unreliable" federal government employees in direct violation of the Hatch Act. In other words, he has already openly stated that he is going to ignore the rule of law and govern as a dictator.

And just who is going to stop him? Congress? After 30 years of gradually ceding its power to the executive branch? Please. If John Boehner couldn't get up the courage to do anything more than whine about Obama's thumbing his nose at the War Powers act over Libya, it is very difficult to believe that the institution would do much of anything to check a president who was determined to test the limits in pushing for dictatorial powers.

Gays, Muslims and illegal immigrants also aren't likely to fair too well under a Gingrich presidency given the things he has said about those groups, but also at risk would be the Occupy movement and anyone else who might be thinking of taking to the streets in protest of economic injustice. Gingrich has made it perfectly clear that he has no respect for Occupy, and he is the type of personality who wouldn't hesitate to use the recently authorized presidential powers to order the military to detain protest leaders indefinitely as potential "terrorists."

Having said all of that, Gingrich would nevertheless be the president this Spoiled Rotten Nation with its Me First politics so richly deserves. For three decades the citizenry has stood passively by with their collective thumbs up their asses as their economic livelihoods and constitutional rights have been gradually stolen out from under them by the craven political class working on behalf of their Wall Street puppet masters. Gingrich himself is a man-child on ego steroids who gives not a single flying fuck about anyone but his own bad self. It would be quite fitting if the dark political path we started down with the election of Ronald Reagan in 1980 ends at his front doorstep. For he is potentially our Nero, the unhinged ruler who will set America ablaze and then unconcernedly play his violin as everything burns down around him.


Bonus: It doesn't take Johnny Smith to see who Newt Gingrich really is