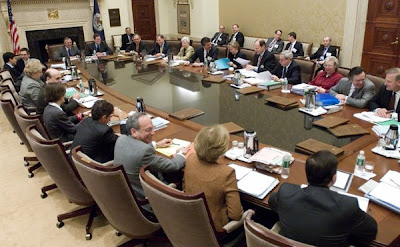 More than four years into the start of The Long Emergency, one astonishing aspect of the crisis is that so many people still retain their faith in the system and that their so-called "leaders" are wise and all knowing and will do the right thing and see us through to a glorious economic recovery. Even though there are overwhelming indicators that the government and banking officials charged with running the economy are incompetent dolts whose groupthink is so pervasive that they are unable to see what is right in front of their eyes, most people still believe and put their trust in them. I guess in a way we should be thankful for that, because an overwhelming loss of that faith would no doubt cause a nearly instantaneous economic collapse.

Up until now, however, those few of us who actually understand what has been going on have only been able to speculate about the incompetence of our economic stewards, particularly at the Federal Reserve. What we lacked was hard evidence of just how the disastrous decisions leading up to the crisis were being made. Thanks to a New York Times story printed on Thursday, however, the true story of the Fed's utter cluelessness is now out there for all to read:


As the housing bubble entered its waning hours in 2006, top Federal Reserve officials marveled at the desperate antics of home builders seeking to lure buyers.
The officials laughed about the cars that builders were offering as signing bonuses, and about efforts to make empty homes look occupied. They joked about one builder who said that inventory was “rising through the roof.”

But the officials, meeting every six weeks to discuss the health of the nation’s economy, gave little credence to the possibility that the faltering housing market would weigh on the broader economy, according to transcripts that the Fed released Thursday. Instead they continued to tell one another throughout 2006 that the greatest danger was inflation — the possibility that the economy would grow too fast.

“We think the fundamentals of the expansion going forward still look good,” Timothy F. Geithner, then president of the Federal Reserve Bank of New York, told his colleagues when they gathered in Washington in December 2006.

Some officials, including Susan Bies, a Fed governor, suggested that a housing downturn actually could bolster the economy by redirecting money to other kinds of investments.

And there was general acclaim for Alan Greenspan, who stepped down as chairman at the beginning of the year, for presiding over one of the longest economic expansions in the nation’s history. Mr. Geithner suggested that Mr. Greenspan’s greatness still was not fully appreciated, an opinion now held by a much smaller number of people.

Meanwhile, by the end of 2006, the economy already was shrinking by at least one important measure, total income. And by the end of the next year, the Fed had started its desperate struggle to prevent the collapse of the financial system and to avert the onset of what could have been the nation’s first full-fledged depression in about 70 years.

The transcripts of the 2006 meetings, released after a standard five-year delay, clearly show some of the nation’s pre-eminent economic minds did not fully understand the basic mechanics of the economy that they were charged with shepherding. The problem was not a lack of information; it was a lack of comprehension, born in part of their deep confidence in economic forecasting models that turned out to be broken.

“It’s embarrassing for the Fed,” said Justin Wolfers, an economics professor at the University of Pennsylvania. “You see an awareness that the housing market is starting to crumble, and you see a lack of awareness of the connection between the housing market and financial markets.”

“It’s also embarrassing for economics,” he continued. “My strong guess is that if we had a transcript of any other economist, there would be at least as much fodder.”

The whole article is quite lengthy and worth reading in its entirety. What's truly amazing is how the mantra was repeated after the 2008 market crash that "nobody could have predicted" that the housing market would be a catalyst for tanking the entire economy. Which was complete and utter bullshit. There were plenty of voices predicting what would happen, they just weren't allowed to be heard in those Federal Reserve meetings.

Even more amazing is how none of these people who completely blew the most important call of their professional lives have suffered any negative career consequences as a result. Geithner, who comes off as particularly clueless in this article, was of course subsequently installed by President Hopey-Changey as his Treasury Secretary. That's how it works in America these days. "Accountability" is only a word that applies to the little people. The movers and shakers have nothing to fear in that regard, no matter how badly they fuck up.

So today, these same feckless SOBs are still running the economy, and the vast majority of the population still retain their faith in them. But you have to wonder how much longer that can possibly remain the case.


Bonus: So when did Alicia Silverstone join the Federal Reserve?