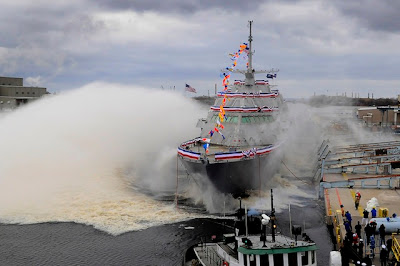 Despite having massive and unsustainable federal government deficits, we just CAN'T cut the Pentagon's budget...or the Red Chinese hordes will descend upon upon us and um, eat our babies, or something. That's what the many Congresscritters who are bought-and-paid for appendages of the military-industrial complex want a gullible public to believe so they have an excuse to keep lining those defense contractors' pockets (and hence keep the campaign cash a-flowing). Meanwhile, as reported this last week by Danger Room, the Pentagon continues to waste that taxpayer money in massive quantities:


It’s bad enough that the Navy’s newest ship has had wicked problems with corrosion, missed out on the latest naval wartime missions and is generally something of a Frankenstein’s monster. Now the Pentagon’s top weapons tester has found problems with its abilities to find and withstand mines — which is a big problem for a ship that’s supposed to be the Navy’s minehunter of the future.

That’s the assessment of the director of the Operational Testing and Evaluation office, summing up a year’s worth of trials for the Littoral Combat Ship, the Navy’s cherished — and expensive — next-generation ship for warfare close to a shoreline. Little wonder that defense analysts think the ship is headed for the budgetary chopping block, even though the Navy wants 55 of the things and only has three.

The report finds that the Littoral Combat Ship’s systems for spotting mines, the AN/AQS-20A Sonar Mine Detecting Set and the Airborne Laser Mine Detection System, are “deficient” for their primary task. That deficiency, if uncorrected, will “adversely affect the operational effectiveness” of a ship that’s already “not expected to be survivable in a hostile combat environment.”

And here is what a military blogger had to say about this latest boondoggle:


So, we have a warship design that is not expected to fight and survive in the very environment in which it was produced to do so. Poorly-armed, poorly-protected, with an over-abundance of speed that will eat through a fuel supply in half a day.

Yet, the Navy leadership on whose watch this abomination was delivered is hypersensitive to criticism of either their performance or the LCS itself. That such a questionable and limited capability will cost taxpayers UNDER $500 million per copy is a seeming source of pride for them.

Warships remain the single most expensive combat system a nation can buy. Has been so since the beginnings of the iron warship. Those who run the United States Navy (not just NAVSEA) are entrusted with billions of this nation’s treasure. And this is the result. A half-billion dollar counter-drug and counter-piracy platform.

Combat in the littorals is characterized by fierce and unexpected engagements, from small and fast surface vessels, submarines, shore-based weapon systems, missiles, mines, and aircraft. Putting US Navy Officers and Sailors on a platform such as LCS borders on criminal. It is an act of sheer folly, or one of desperation.

Actually, you left one out. For what it really is represents is an act of sheer greed on the behalf of the defense contractors who build these expensive-but-useless pieces of shit and don't care that they are ripping off the taxpayers in the process. Moreover, the Navy is hardly alone in such fraudulent procurements. The war machine marches on, devouring around one-trillion dollars in direct and indirect federal spending every year because it is profitable to everyone involved in getting these projects approved. If this country still had any common sense, the defense contractors are the people we'd been hauling off to Guantanamo, for they are doing far more collective damage to America as a nation than the terrorists ever did.


Bonus: "Listen son, said the man with the gun, there's room for you inside"