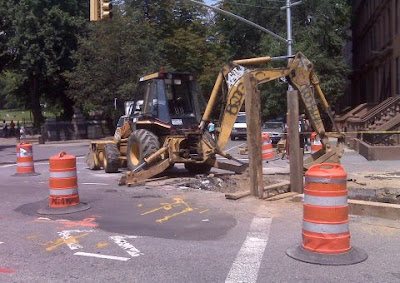 Though the rapid deterioration of the nation's roads and bridges gets more publicity, the similar situation involving our water and sewage systems may in fact be even more dire, as indicated by this rather sobering story from the Washington Post:


At first glance, the pizza-size hole that popped open when a heavy truck passed over a freshly paved District street seemed fairly minor.

Then city inspectors got on their bellies with a flashlight to peer into it. What they discovered has become far too common. A massive 19th-century brick sewer had silently eroded away, leaving a cavern beneath a street in Adams Morgan that could have swallowed most of a Metro bus.

It took three weeks and about a million dollars to repair the sewer, which was built in 1889.

Time and wear “had torn off all the bricks and sent them God knows where,” said George S. Hawkins, general manager of the District of Columbia Water and Sewer Authority. “We have to find them and see if they’re plugging up the system somewhere farther down the line.”


Although they are out of sight and out of mind except when they spring a leak, water and sewer systems are more vital to civilized society than any other aspect of infrastructure.

Rapidly deteriorating roads and bridges may stifle America’s economy and turn transportation headaches into nightmares, but if the nation’s water and sewer systems begin to fail, life as we know it will too. Without an ample supply of water, people don’t drink, toilets don’t flush, factories don’t operate, offices shut down and fires go unchecked. When sewage systems fail, cities can’t function and epidemics break out.

“All the big cities have these problems, and to me it’s the unseen catastrophe,” Hawkins said. “My humble view is that the industry we’re in is the bedrock of civilization because it’s not just an infrastructure that is a convenience, that allows you to get to work faster or slower. At least with bridges or a road, people have some idea of what it is because they drive on them and see them. ”

And just like roads and bridges, the vast majority of the country’s water systems are in urgent need of repair and replacement. At a Senate hearing last month, it was estimated that, on average, 25 percent of drinking water leaks from water system pipes before reaching the faucet. The same committee was told it will take $335 billion to resurrect water systems and $300 billion to fix sewer systems.

Kudos to the Washington Post for not understating what the risks are of this particular infrastructure crisis. And a crisis is what it is. For just about two-thirds of the cost of the Iraq War, America could have addressed this situation, which given the potential for a major epidemic outbreak is obviously a far greater threat to our national security than Saddam's Hussein's non-existant weapons of mass destruction ever were.

Probably, the most frightening part of this story came at the very end:


Firefighters are equipped with computerized cue sheets to tell them which of the 9,157 hydrants in the District have enough water pressure to put out a fire.

Someday, they are going to do that check and the answer is going to be "none." And then the city will really be in trouble.

But hey, didn't Rick Santorum say something stupid about gay marriage again on the campaign trail the other day? I guess all is well in the republic and this report can be safely dismissed as the ramblings of an unbalanced Cassandra.
Posted by Bill Hicks at 12:28 PM