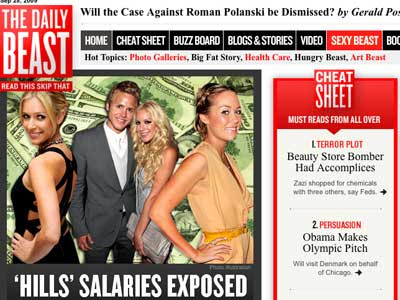 I had to laugh upon reading this op-ed article by Newsweek and Daily Beast scribe John Avalon that was posted on Monday. Entitled, "Charlie Sheen's "Winning" Streak: Celebrity Gossip Is Making Us Stupid," it makes the rather obvious point that the mainstream media's obsession with every little detail of the lives of celebrities is crowding out important news and causing the the nation to be less informed:


Bread and circuses were what Romans leaders used to subdue citizens for hundreds of years before their civilization’s fall. We have celebrity gossip.

It is greedily consumed and takes on the dimensions of real news – banner headlines, magazine covers and lead stories, with dependably high click-through rates. It is all artificial urgency, fiction parading as fact. And it’s making us stupid.

The problem is not with the entertainment industry per se – Hollywood is one of America’s greatest exports to the world, a form of soft power as well as storytelling that can inspire hearts and minds. The problem is in the parasitic industries that pop up around it, especially reality TV, which offers the promise of fame without the bother of talent or hard work.

As we start a new year, it's worth testing the hypothesis. I had a researcher look at how many times top celebrity gossip stories of 2011 – Charlie Sheen and the Kardashians – were mentioned on television and in newspapers. Then he compared them to coverage of actual news, the stuff of war and peace and self-government. The results aren’t pretty.

In March of 2011, Charlie Sheen’s defiantly public drug, drink and hooker binge in full swing. With generous nods to Hunter S. Thompson in his pace and tone, Sheen briefly created a cottage industry by filming and tweeting his meltdown for public consumption. It was mesmerizing to many, offering the vicarious thrill of a sex scandal with the rubbernecking that accompanies a car crash on the California freeway.

But here’s the thing: Charlie Sheen’s meltdown got more mentions on television news, magazines and newspapers in March than the War in Iraq over the course of March and April combined.

That’s a problem, people. It’s a sign of a society amusing itself to death. We would rather reward celebrity with our attention than pay heed to our brave men and women fighting and dying half a world away. It’s not intentionally callous, but it is escapist in its attempt to wave the world away.

P.T. Barnum might have enjoyed the spectacle of the televised Kardashian wedding, but even he might have been surprised by the lack of commitment in perpetrating the 72-day scam. This is a family that is famous for being famous, with notoriety goosed by the occasional well-placed sex scandal.

Well, no shit, Sherlock. So what do you and your intrepid colleagues at The Daily Beast propose we DO about this depressing state of affairs?


We’re not going to change this dynamic overnight, but as we start a new year with new resolutions, its not too much to hope that we can adjust just a little bit, to focus more on what really matters as opposed to the disposable trash of distraction. It’s our own individual responsibility as much as the network heads or editors – they react to the votes we cast with our wallets and eyeballs everyday. The problem with a diet of bread and circuses isn’t a lack of fun; it’s the slow decay of our civic muscle. And we all know how Rome ended up. We still have time to make different choices – it can start with a resolution on the first day of a new year.

Really? That's your dumbass idea for combating this problem? Imploring you readership to make a New Year's resolution?

I have a better idea, Mr. Avalon. How about if you and your cohorts at The Daily Beast strike the first blow by removing all such celebrity-driven nonsense from your own damn website. Because in checking the far right column of the very page on which your article appears, I saw the following linked headlines from your publication and others:

Be the Guy Whose Shirts Always Look Fresh

52 Examples of Why Florida is Still the Craziest State

The Best Celebrity Families of 2011

Edwards Asks Mistress to Move In

Oh, and then just for shits and giggles I clicked of The Daily Beast front page, and what should happen to greet me but a big picture of Katy Perry and Russell Brand. And let's not forget this prominent link that was right there with the headlines of the day:

Damn, this is like shooting fish in a barrel. I hate to be the one to break this to you, Mr. Avalon, but you are employed by an organization that is just as guilty of celebritard worship and dumbing down the culture as any other mainstream media outlet. So unless you are prepared to give up that cushy gig and stop being a part of the problem, you really should do us all a favor and spare us your inane blather about what New Year's resolutions the rest of us ought to be making.


Bonus: We may all know crap is king, but apparently it's news to John Avalon