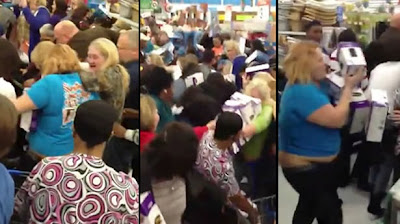 As usual, we get a better perspective of the true economic conditions in the U.S. from foreign news sources than we do from our own utterly compromised corporate media. The Guardian UK ran a story on Friday that gave a brief overview of the present world economic situation. Here's what it had to say about our own country:


The year 2011 will be remembered as the time when many ever-optimistic Americans began to give up hope. President John F Kennedy once said that a rising tide lifts all boats. But now, in the receding tide, Americans are beginning to see not only that those with taller masts had been lifted far higher, but also that many of the smaller boats had been dashed to pieces in their wake.

In that brief moment when the tide was indeed rising, millions of people believed that they might have a fair chance of realising the "American Dream". Now those dreams, too, are receding. By 2011, the savings of those who had lost their jobs in 2008 or 2009 had been spent. Unemployment cheques had run out. Headlines announcing new hiring – still not enough to keep pace with the number of those who would normally have entered the labour force – meant little to the 50-year-olds with little hope of ever holding a job again.

Indeed, middle-aged people who thought that they would be unemployed for a few months have now realised that they were, in fact, forcibly retired. Young people who graduated from college with tens of thousands of dollars of education debt cannot find any jobs at all. People who moved in with friends and relatives have become homeless. Houses bought during the property boom are still on the market or have been sold at a loss. More than seven million American families have lost their homes.

A very good summary. Unfortunately, later in the article, the author is revealed to still have their mind stuck in the usual conventional Keynesian economic rut:


The good news is that addressing these long-term problems would actually help to solve the short-term problems. Increased investment to retro-fit the economy for global warming would help to stimulate economic activity, growth, and job creation. More progressive taxation, in effect redistributing income from the top to the middle and bottom, would simultaneously reduce inequality and increase employment by boosting total demand. Higher taxes at the top could generate revenues to finance needed public investment, and to provide some social protection for those at the bottom, including the unemployed.

Even without widening the fiscal deficit, such "balanced budget" increases in taxes and spending would lower unemployment and increase output. The worry, however, is that politics and ideology on both sides of the Atlantic, but especially in the US, will not allow any of this to occur. Fixation on the deficit will induce cutbacks in social spending, worsening inequality. Likewise, the enduring attraction of supply-side economics, despite all of the evidence against it (especially in a period in which there is high unemployment), will prevent raising taxes at the top.

Long time readers of this blog know that I favor taxing the living fuck out of the 1% simply from a basic fairness standpoint. They are the ones who benefit the most from the system as currently constituted, and who also get plenty of corporate welfare, so it is only fair that they should have to pay a lot more than the ridiculously low tax rates, particularly on capital gains, that they are currently paying. But raising their taxes significantly will not turn the economy around or do anything more than maybe delay our ultimate day of economic reckoning.

Additionally, as someone who also believes that our insane levels of federal deficit spending are actually the greatest economic threat we face, I very much resent the notion that not agreeing with the lunatic Keynesian idea that we should double down on that insanity makes me a believer in supply side economics. I actually believe that everyone, governments included, should pay their fucking bills. Is that really so radical?

Reading this depressing claptrap for the umpteenth time, I came to the realization that you can in fact boil down the two main main competing modern economic philosophies into Me First (Austrian) versus Spoiled Rotten (Keynesian). One side believes that they should be able to keep everything they "earn" and fuck the common good, while the other side believes that we should rob from the rich so that the poor can afford to go out and beat each other senseless trying to be the first to buy the latest pair of overpriced basketball shoes or mindless video game. Both sides are utterly full of shit and the mortal enemies of anyone who believes in sustainability. So from now on, the terms "Austrian" and Keynesian" will henceforth be replaced on TDS by "Me First" and "Spoiled Rotten." Because that is just the way it is.


Bonus: "How do the people feel about living in a coast-to-coast shopping mall? Well, they think it is JUST FUCKING DANDY"