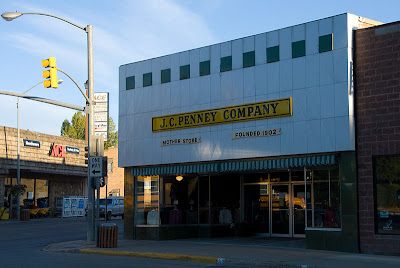 In the wake of the big store closing announcement by Sears, comes a similar story today about long time rival J.C. Penney. No store closings annocement as of yet, but the comapny's new CEO is apparently planning to eliminate "thousands of jobs," which would seem hard to do without closing at least a few locations. Here is Bloomberg with the details:


J.C. Penney Co., run by Apple Inc.’s former retail chief, will cut thousands of jobs as part of a plan to overhaul the company, the New York Post reported.

Chief Executive Officer Ron Johnson is eliminating positions that involve re-tagging merchandise and putting up temporary signs and displays, the Post said, citing people it didn’t name. The reductions will affect employees at almost all of J.C Penney’s 1,200 stores in the U.S.

The job cuts are part of a strategy to replace the company’s traditional sales and clearance events to offer everyday low prices, the newspaper said. J.C. Penney is holding an event on Jan. 25 to announce Johnson’s plans.

The Post said Johnson is being encouraged to cut jobs by J.C. Penney’s largest shareholders, William Ackman and Steve Roth.

Like Sears, J.C. Penney is an iconic American retailer that has been around for more than 100 years. Also like Sears, the chain has in recent years lost all of the qualities and connection to local communities that once made it special. No doubt this action is just the first step that will eventually lead to the chain's demise. And you can bet that vultures Ron Johnson, William Ackerman and Steve Roth will extract every dollar of value they can before they bury the corpse.
Posted by Bill Hicks at 12:42 PM