Idiocracy in South Florida: Pythons Are Wiping Out Mammals in the Everglades 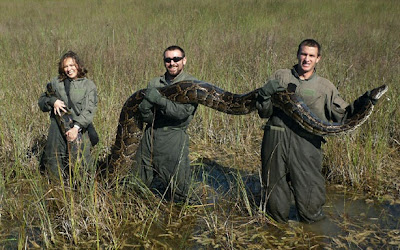 Is there ANYONE left in this country who gives a damn about the common good anymore? Hardly a day passes when I don't see at least one story that illustrates just how stupid and short sighted our society has become. I visited the Everglades once about 20 years ago, and was struck by their natural beauty. You would think the will would be there to protect such an important and fragile ecosystem. That the Everglades are environmentally stressed by the rapid development of southern Florida is old news. But, as reported this week by the Atlantic Wire, they now face a new threat that was appallingly preventable:


According to a new study, the introduction of non-native snakes into southern Florida swamps has devastated the population of small mammals, almost completely wiping out some vulnerable species. According to the U.S. Geological Survey, the number raccoon and possums spotted in the Everglades has dropped more than 98%, bobcat sightings are down 87%, and rabbits and foxes have not been seen at all in years.

Large snakes, like boa constrictors, anacondas, and pythons, are not native to North America, but are popular among reptile collectors and traders who — inadvertently or not — re-introduced them to the Florida swamps about a decade ago. Since that time they caused a huge disruption to the already fragile ecosystem, threatening wildlife and even some humans. They grow fast, breed rapidly, adapt well to their environments, and prey on small animals that don't recognize them as a threat. They're also great at hiding, which makes them both deadly hunters and difficult to catch.

They will also eat just about anything, even birds, deer, and alligators. (The 162-pound Burmese python pictured above had recently swallowed a gator.) That's why the government banned the import of Burmese and other pythons last year, although (thanks to lobbying by the U.S. Association of Reptile Keepers) the reticulated python and the boa constrictor are still allowed to be traded.

I'm going to go out on a limb here and say that the snakes never should have been allowed into the U.S. in the first place, and especially not into an area where they could thrive in the wild. And note how difficult it has been for the government to even close this particular barn door long after the horse has escaped, disappeared over the horizon and become boa constrictor bait. The answer to U.S. Association of Reptile Keepers should have been: thanks to your dumbass membership, there are plenty of the damn reptiles right out there in the swamps for you.

No word yet on whether pythons and boa constrictors actually eat Newts...but we can certainly dream.


Bonus: "Snakes in my bushes"