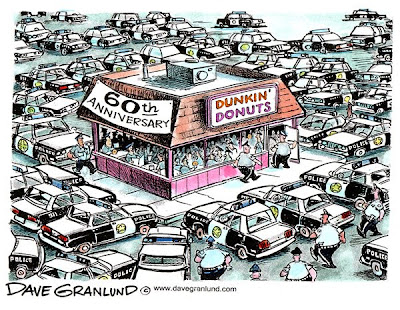 Sadly, this is what passes for good economic news these days, as reported by CNN Money:


America is about to run on twice as much Dunkin'.

Dunkin' Donuts plans to double its locations in the United States over the next 20 years, the company announced Wednesday.

The coffee and doughnut chain currently operates nearly 7,000 stores nationwide. Each new store adds an average of 20 to 25 new employees, both full and part-time a Dunkin spokeswoman said.

Hold on, let me take of my shoes and socks for a minute so I can do the math. Hmmm…by my calculation that means that assuming Dunkin’s expansion plans are carried through to fruition over the next two decades, the company will be creating 140,000-175,000 jobs, or about 7,000 to 8,500 jobs per year on average. Mostly minimum wage jobs, by the way, which barely leave the employees with enough earnings to buy the company’s crappy donuts.

Wowwee…break out the Champagne, ‘cause happy days are here again…not!

So how can Dunkin' afford these major expansion plans, anyway?


The announcement came as Dunkin' also said it has finished streamlining its supply chain, consolidating four existing regional suppliers under one entity, National DCP. The company said the move will cut costs.

Hmmm…how do you suppose the streamlining of Dunkin’s regional suppliers is going to accomplish such huge cost savings? The article doesn’t say so, because the business reporter stenographer didn’t ask the question, but I’ll bet layoffs at those other companies were a factor. So at least some of the jobs supposedly being created are likely just being transferred from one aspect of the business to another, which diminishes even the relatively meager overall job creation aspect of this announcement.

Then you also have to ask the question whether adding 7,000 more junk food outlets in a nation which already has an obesity epidemic is really all that beneficial. Dunkin' doesn’t have to pay the medical bills of people who destroy their health in part by consuming their products every day. That cost falls upon the rest of us, one way or another. Funny how the states managed to sue the tobacco industry to recoup increased health care costs from smoking, but the suggestion never gets made that the same action might be appropriate to undertake against other merchants of death like Dunkin' Donuts.

I hate to be such a party pooper, but if this is what passes for good economic news in America these days, it just demonstrates even more that we are in deep, deep trouble.


Bonus: We are soon to become a whole nation of Fred the Bakers