"Get Your Ass Down Here, Prime Minister Harper!" 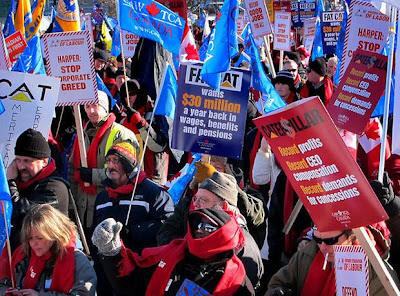 Holy crap, what's this? The mayor of a city not taking lying down the gutting of a local factory's workers' pay and benefits after the foreign corporation which owns it was granted huge tax breaks? Not to mention that same mayor is also excoriating the nation's leader for favoring corporate interests over those of the workers? Fabulous! Too bad it is only happening north of the border, as reported Saturday by Digital Journal:

So what exactly has the mayor all up in arms?


Since the start of the year, about 425 unionized Electro-Motive Diesel workers in London have been locked out by Progress Rail, a subsidiary of Caterpillar Inc. The highly profitable, global company shocked many by demanding London workers take a 50 percent drop in pay, accept deep cuts to their benefits, and stand by as their pension plans were gutted.

Yeah, that's pretty bad. I can see why people might be pissed off. And I found these quotes to be particularly delicious:


Stop, ask a pleasant looking older woman why she is there. You learn her son has worked at EMD for years and his reward is being locked out, put onto the street in January in the middle of the Canadian winter. "Tell Harper to get the money back . . . It's our money he gave to those bastards!" She spits out the words with venom.

Everyone hears the personal story of the Jones family when Brianna Jones and her father, Ian, take centre stage. Brianna made her contempt for the giant American company clear. Without unions she said, "We'd all be living in the slums. They don't care." She continued, "Our family's budget will be slashed in half." Brianna is attending university in Windsor and plans on going on to earn her doctorate. A crumbling family budget would hurt.

"It is morally wrong to call (my father's) life's work unskilled," she says talking about her dad. Brianna is proud of her father. "We should not have to inherit a society where greed trumps morality." The crowds loudly chants, "Greed. Greed. Greed."

Oh, and here you see the lingering effects of the Occupy movement:


But it was not only private and public-sector labour unions that were attracted to the rally; It also drew non-labour supporters as well. Sister Sue Walker of the Sisters of St. Joseph in London warned, "The social contract is breaking down." She said, "Wealth is trickling upwards" and this is "tearing at the fabric of society. Now is the time for the 99 percent to stand together."

The biggest question I have every time I read the latest story about a factory being shut down so that production can be moved to China, or workers being laid off by CEOs who are still paid tens of millions of dollars is: where is the outrage? Every time this kind of shit happens in America, the workers just meekly take it and don't ever protest. Why not yell and scream and make your voice heard? Ultimately, it might not save your job, but it might serve to finally wake people up to what is really going on in this country.


Bonus: Which side are you on?