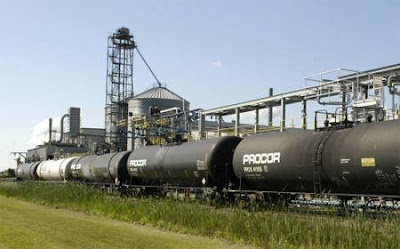 One of the dumbest public policy decisions made in recent years was the subsidy paid by the federal government to ethanol producers. Not only did the subsidy directly contribute to the national debt, it helped drive up the price of corn, which is one of our most basic food staples. It also artificially suppressed the price of gasoline, and if there is one thing government policies should NEVER do in this peak oil era, it's encourage people to use more oil and gas than they would otherwise. Here is USA Today with the details:


Gasoline could cost 4.5 cents a gallon more starting as early as this week, and it's not because of rising oil prices.

It's because Congress declined to renew the 30-year-old federal subsidy for ethanol, letting it expire Sunday.

Ethanol, denatured grain alcohol used as a proven smog-cutting ingredient, currently makes up 10% of most gasoline-based motor fuel for general use, so-called E-10. In a few areas, E-85 fuel, 85% ethanol, also is available. E-85 can be burned only by vehicles equipped for "flex fuel."

How much the end of the subsidy could add to gas prices, and how soon, is yet to be seen. Ethanol blenders got a 45-cents-a-gallon tax credit, which amounts to 4.5 cents for the amount blended into each gallon of E-10 fuel.

It's hard to calculate the immediate impact. Oil prices and ethanol stocks are in flux. And unknown is the impact of another move by Congress: dropping the 54-cents-per-gallon tariff on ethanol imports. Brazil is a leading global producer of ethanol made mostly from sugar cane.

In the U.S., ethanol primarily is made from corn. That has made the ethanol subsidy controversial because of allegations that it raised food prices. The estimated $6 billion annual cost of the subsidy also has added to the federal deficit.

Of course, they had to go and diminish the positive effect on the nation's balance sheet by also eliminating the tariff on Brazilian ethanol, but at least this is a step in the right direction.


Update: I stand corrected on this actually being good news. See reader bmerson's comment below and my response.
Posted by Bill Hicks at 4:58 PM