Fifteen Years After Their Reintroduction, Wolves are Being Slaughtered Again 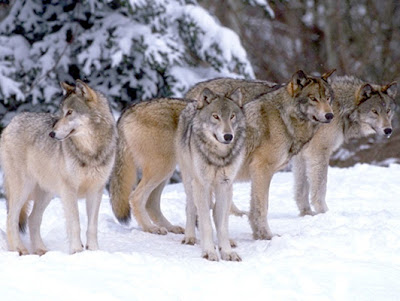 In doing this blog, I've become pretty numb to bad news. But sometimes, I'll read a story that depresses me so badly that I just want to stop the world so I can get off. As reported by the Los Angeles Times, the politically motivated slaughter of wolves has resumed in the very same states where their reintroduction was widely celebrated just a decade-and-a-half ago:


Congress removed wolves in Montana and Idaho from the protection of the Endangered Species Act in April. And this fall, the killing began.

As of Wednesday, the Idaho Department of Fish and Game reported that 154 of its estimated 750 wolves had been "harvested" this year. Legal hunting and trapping — with both snares to strangle and leg traps to capture — will continue through the spring. And if hunting fails to reduce the wolf population sufficiently — to less than 150 wolves — the state says it will use airborne shooters to eliminate more.

In Montana, hunters will be allowed to kill up to 220 wolves this season (or about 40% of the state's roughly 550 wolves). To date, hunters have taken only about 100 wolves, prompting the state to extend the hunting season until the end of January. David Allen, president of the powerful Rocky Mountain Elk Foundation, has said he thinks hunters can't do the job, and he is urging the state to follow Idaho's lead and "prepare for more aggressive wolf control methods, perhaps as early as summer 2012."

Wyoming Gov. Matt Mead recently concluded an agreement with Interior Secretary Ken Salazar to save 100 to 150 wolves in lands near Yellowstone National Park. But in the remaining 80% of the state, wolves can be killed year-round because they are considered vermin. Roughly 60% of Wyoming's 350 wolves will become targeted for elimination.

What is happening to wolves now, and what is planned for them, doesn't really qualify as hunting. It is an outright war.

So what is the reason for the about face from protecting wolves as an endangered species, to not even tolerating a few hundred of them in the gigantic western states? Oh, the usual asshattery:


Part of the reason was the increase, particularly in Idaho and Montana, in paramilitary militia advocates, with their masculine ideal of man as warrior who should fight the hated federal government, by armed force if necessary. They were outraged by what they saw as federal interference in the region spurred by environmentalists, and their ideas found a willing reception among ranchers, who view wolves as a threat to their livestock — even though they ranch on federal land — and hunters, who don't want the wolves reducing the big game population.

The factions have reinforced one another, and today a cultural mythology has emerged that demonizes the federal government, the environmental movement and the wolves themselves. Many false claims have been embraced as truth, including that the Fish and Wildlife Service stole $60 million from federal excise taxes on guns and ammunition to pay for bringing wolves back; that the introduced wolves carry horrible tapeworms that can be easily transmitted to dogs, and ultimately to humans; that the Canadian wolves that were brought in are an entirely different species from the gray wolves that once lived in the Rockies, and that these wolves will kill elk, deer, livestock — even humans — for sport.

Once again, as I've pointed out repeatedly on this blog, the most destructive governmental policies are usually bipartisan initiatives:


Politicians from both parties in Western states have been eager to help with the fortifications. In Idaho, Republican Rep. Mike Simpson and the state's governor, Butch Otter, made removal of wolves from the Endangered Species Act a political priority. In Montana, Republican Rep. Denny Rehberg has made delisting wolves central to his 2012 Senate campaign against Democratic Sen. Jon Tester. In April, Tester in turn persuaded fellow Democrats in the Senate to approve his inserting a rider in a budget bill that delisted wolves.

In early November, Sen. Max Baucus, a Montana Democrat, made his own political contribution. Thrilled at the testing of a drone aircraft manufactured in Montana, Baucus declared: "Our troops rely on this type of technology every day, and there is an enormous future potential in border security, agriculture and wildlife and predator management." A manufacturer's representative claimed his company's drone "can tell the difference between a wolf and a coyote." Pilotless drone aircraft used by the CIA and the Air Force to target and kill alleged terrorists now appear to be real options to track and kill "enemy" wolves.

I visited the Canadian Rockies a few summers ago, and one of the highlights of the trip came early one morning when my wife and I actually spotted a wolf near the side of a mountain road. It darted into the woods too quickly for us to get a snapshot of it, but just knowing it was there made us feel good. What a truly disgusting specimen we humans are as a species that we can't even tolerate the existence of a small population of a magnificent animal like the wolf among us.

There are those in the peak oil community who wish collapse would come sooner rather than later in order to halt the ongoing destruction of the natural world. I don't necessarily subscribe to that particular viewpoint, but after reading stories like this one I do understand why they feel the way they do.
Posted by Bill Hicks at 7:00 AM