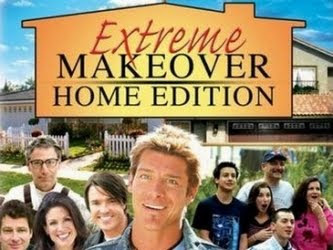 Until I read the news article referenced below, I had no idea that the reality teevee show, Extreme Makeover, Home Edition, had just been cancelled. Actually, I hadn't even been aware that it was still on the air five years into the housing crash. To say I wasn't a fan of the show is an understatement. People were drawn to it because the folks whose homes were rebuilt were usually facing some sort of personal or financial hardship. But what the show was really selling was the rather insidious message that having more material things is the key to happiness in life.

Case in point is this story from azcentral.com about the aftermath of one Arizona family's appearance on the show:

But financial woes spoiled the show's fairy-tale ending, forcing the Okvath family -- Bryan, Nichol and their seven children -- to sell their one-time $1 million mansion for $540,000 in the spring of 2010.

A sad tale of woe, no doubt. So what happened, exactly?


The Gilbert episode began in 2004, when one of the Okvath's daughters, Kassandra, then 8, was undergoing treatment for cancer at the University of Arizona Medical Center in Tucson.She was a fan of the show and wrote to the producers, asking them to rebuild the center's cancer ward.

The producers, touched by her selfless plea, hatched a bigger plan. In addition to renovating the cancer ward, they would tear down the 1,800-square-foot house (with its leaky roof and problem plumbing) that Kassandra's family was renting and rebuild a dream home.

The project generated enormous interest in the Valley. Nearly 4,000 people stood outside the home on a cold and rainy February day to watch the unveiling. The episode aired on March 13, 2005, with the stunned Okvath family reacting with smiles and tears of joy.

And the home's owner, who had okayed the renovation, had signed the property over to the Okvaths, giving the family full ownership.

It seemed like exactly the type of happy ending the show was famous for, but after the cameras left, reality intruded.

Bryan, who was unemployed when the show was filmed, worked sporadically as a truck driver and fire fighter, but none of the jobs paid particularly well. Strapped, the couple used the house as collateral for a $405,000 loan in 2006, but payments on the adjustable-rate mortgage soon became unmanageable.

In early 2010, it was reported that the Okvaths had been separated for several months and seemed headed for divorce. Efforts to reach them for comment were unsuccessful.

It just goes to show, yet again, that there is no such thing as a free lunch. Yes, it's terrible that little Kassandra Okvath contracted childhood cancer, but quite obviously just handing her family a dream house that they could not afford even if it came with no mortgage was not the answer to their problems. How exactly did anyone connected with this fiasco expect an unemployed truck driver with seven kids to be able to keep up with the expenses of living in a million dollar house?

There is a reason why people like the Okvaths live in shitty houses in the first place: because they either make poor life's decisions, or they are born disadvantaged and don't possess the talent or smarts to rise above their station. I'm not putting them down, just stating the unfortunate fact. What happened in this instance is very reminiscent of lottery winners who end up bankrupt five years later. Some people just cannot handle prosperity. Not to mention the fact that it is also long past time that people stop viewing material possessions as the key to happiness in their lives regardless.

This is a great lessen that ought to be heeded by Spoiled Rotten (Keynesian) economists like Paul Krugman. Just having the government tax the rich and borrow more money from future generations to hand out to people is not going to fix their long term financial predicaments, even if as a nation we could afford it anymore.

It's actually too bad that instead of being cancelled, Extreme Makeover: Home Edition cannot be forced to do a follow up episode on what happened to this unfortunate family as well as any others who appeared on the show who might be in the same predicament. Because I'll just bet the Okvaths aren't the only ones. The aftermath of such fantasy pipe dreams is the real "reality show" that Americans desperately need to see.


Bonus: This short clip from the show is disquieting, and not just because mom falls down