Another Globalization Blow to My Home Town 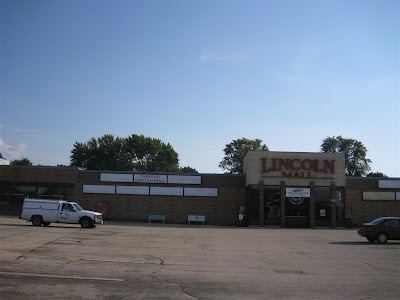 image: The Lincoln Mall in Freeport, Illinois. Built the year I was born, the mall was anchored by Sears and JC Penney when I was growing up and along with the downtown business district was the city's prime shopping destination. Like Freeport's downtown, it is now virtually abandoned.

Back on August 12th of last year in my post, "Friday Rant: A Half-Century at the Local Tire Factory in a Globalizing World", I wrote about the history of the factory in my hometown where my father spent his entire career as a middle manager. The factory in question is currently operating at about one-fourth the capacity it was when my father retired, and just recently ownership locked out the workers to win more wage concessions from the union.

Well, the hits just keep on coming for my hometown of Freeport, Illinois, as reported this week by the Freeport Journal Standard:


As the plan to phase out roughly 170 jobs at the Sensata Technologies/Honeywell plant in Freeport continues to move ahead, local workforce officials are meeting with affected staff in an effort to keep them employed in this region.

“We want to make the transition for them as quick and pain-free as possible,” said Stephenson County Board Chairman John Blum, who is a member of the Local Workforce Investment Board (LWIB). “It’s definitely upsetting a lot of lives.”

In early 2011, Sensata announced it would be closing its local plant at the end of 2012, and relocating the jobs there to a plant in China. Normal operations will continue at the Freeport plant until then, but roughly 170 jobs are being phased out gradually.

About 25 employees at the plant are expected to be laid off over the next six weeks. However, many of these employees have chosen to extend their employment at the local plant by moving to another production line there. Still, all the plant employees will be let go by late 2012, at which time the facility will be decommissioned.

I really have one question for the American management officials who make decisions like this. How the fuck do you sleep at night? Seriously, I really want to know. Has corporate America been completely taken over by psychopaths at this point?

Freeport is a small city of around 25,000 mostly blue collar souls who were already struggling from the loss of much of the town's manufacturing base. This action is going to be a real kick in the nuts for the city.

Sadly, this was all predicted back in 1994 by the late James Goldsmith, who ironically was the financier whose attempted buyout of the Goodyear corporation in 1986 caused my father to be laid off for about six months. His subsequent appearance on the Charlie Rose show a few months after NAFTA was passed in 1994 is a rare example of must-see teevee. Goldsmith very presciently warned that globalization was going to destroy the lives of working people in the United States, even as Rose pooh-poohs the idea.

I've posted this video before, but it deserves to be spread as far and widely as possible: