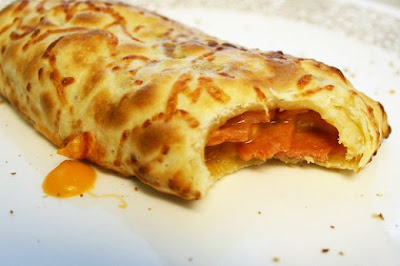 Hot Pockets are some vile, nasty stuff. How anyone can eat them is beyond me (okay, I'll admit I used to indulge from time to time back when I was a bachelor living on a limited budget). Still, people do, and you hate to see anyone getting laid off in this economy. Here is the San Fernando Valley Business Journal with all the greasy details:

The Chatsworth facility specializes in the manufacturing of the popular frozen packaged meal brand, Hot Pockets, and currently employs 645 workers.

Roz O’Hearn, spokesperson for Nestlé Prepared Foods, said the layoffs are a result of the decrease in demand in the frozen food market and the company’s attempt to retain its competitive advantage.

“The economy has affected the frozen food business,” O’Hearn said. “The prices of ingredients have increased and there’s a change in consumer demand.”

At meetings in December, the company shared with employees its plans to cut the manufacturing facility’s production schedule from six days of operation to four. The schedule changes eliminated the need for the current number of employees, O’Hearn said.

A year ago, Nestlé’s Nutrition announced the closing of its plant in Minnesota, cutting nearly 250 jobs in a span of two years.


Note the real problem here: high production costs from rising agricultural prices, which is also affecting sales on the other end (which good little corporate flack Roz O'Hearn euphemistically describes as "a change in consumer demand") as the consumers of Hot Pockets tend to be on the lower end of the income scale.


Bonus: "I got an idea...how about we fill a pop tart with nasty meat?"