"Too Big to Fail" No More 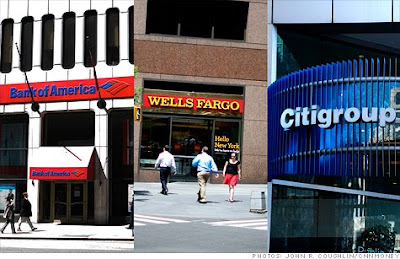 Yesterday, it was reported that three of America’s largest banks, Bank of America, Wells Fargo and Citigroup, were downgraded by Moody’s Investors Services. Here is CNN with the pertinent details:


Moody's has declared the era of too big to fail over.

In yet another blow to the financial sector, Moody's Investors Services announced the downgrade of Citigroup, Wells Fargo, and Bank of America -- three of the United States' top banks.

Among the primary reasons: the U.S. government is less likely to step in to save a troubled financial institution.

"It is more likely now than during the financial crisis to allow a large bank to fail should it become financially troubled, as the risks of contagion become less acute," Moody's wrote in its downgrade note of Wells Fargo's stock.

What's funny about this action is that the major credit rating agencies stood around with their thumbs up their asses during the run up to the 2008 financial crash, attaching their AAA ratings to anything that didn’t move fast enough. Many have rightfully questioned why anybody should trust them now. The answer, of course, is that you SHOULDN’T start trusting them now. But, given that there is motivation for positive bias in every aspect of reporting on the financial system, you should assume that they are still UNDERSTATING the risks, not being overly negative.

So what does all of this mean for us little people? I mean, beyond the obvious, which is that none of us should be investing any money we can’t afford to lose in the common stock of these institutions? Well, the first thing it means is that if you have any money deposited in one of these banks, you really ought to look at getting it moved elsewhere.

But, but, but…I hear you sputtering…what about FDIC Insurance? If my bank goes under, I’ll get my money back, won’t I?

Sigh. I really thought I had taught you better than that. Yes, theoretically the FDIC insures every bank account at member institutions up to $250,000. Nearly 400 banks have failed since the beginning of the financial crisis in 2008, and thus far every depositor has gotten their money back. Sounds like the system is working, doesn’t it?

There’s only one little problem. Like many other institutions in America these days, the FDIC is effectively broke. In fact, the FDIC itself just proudly announced on August 24th that the Deposit Insurance Fund (DIF) is now barely back into the green after being underwater for the previous seven quarters:

Whoo-hoo! Break out the champagne, ‘cause happy days are here again, right?

Wrong again, and here’s why. In 2010, Bank of America alone had more than…wait for it…$800 billion in total deposits. Combined, Bank of America, Wells Fargo and Citibank had a staggering $1.8 TRILLION in deposits.

When the DIF went into the red during the depths of the financial crisis, it was given a $500 billion line of credit by the Department Treasury, which if utilized would not only instantly increase the federal deficit by half a trillion dollars, but STILL wouldn’t cover the losses if just Bank of America alone failed.

The implications of this should be pretty clear. If you have your money on deposit at one of these three institutions, you are at risk of at the very minimum not being able to access it for months while the FDIC tries to figure out how to reimburse hundreds of billions of dollars in deposits. At worst, if say all three of these big banks went down in rapid succession, the FDIC might be unable to borrow enough from the Treasury to cover the losses, and then you would be, as they say, shit out of luck.

So what should you do? I'll admit that's a tricky question. As the market was crashing back in 2008, I pulled most of my savings out of the bank and held it in cash until things settled down. But I'd be lying if I said it didn't make me nervous to physically have it around. More than being robbed, I was worried about what would happen if the house caught on fire.

Some people have no problem stuffing their cash into a mattress or burying it in their backyard, though I would think a sturdy home safe would be a better option. But if you aren't comfortable with any of those measures I would suggest moving your money to a smaller, local bank. Preferably one with a good rating. You can do the research to find such an institution on the website bankrate.com. That is not a foolproof solution by any means, and it won't save you if the whole banking system goes kablooie all at once, but at least when a smaller bank fails, the FDIC will likely still have the money to cover depositor losses.
Posted by Bill Hicks at 6:50 AM