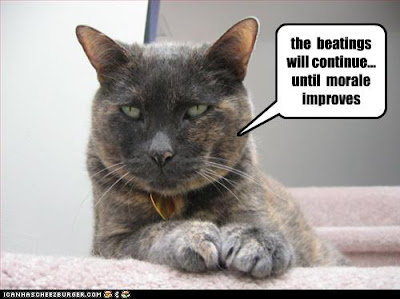 Sometimes you read a news story that is just so dumb that you walk away shaking your head. First term Republican Governor Nikki Haley of South Carolina is a Tea Party darling and, like fellow Indian-American Governor Bobby Jindal of Louisiana, one the party likes to promote to show how diverse it supposedly is becoming. Unfortunately, what Ms. Haley is really proving is that pasty, pudgy old white males don't have a monopoly on low IQ scores occupying high public office these days. As reported by the Charlotte Observer:


Gov. Nikki Haley is ordering state workers to answer phones with a cheery "It's a great day in South Carolina" -- despite a sky-high unemployment rate and the fact that one-in-five residents are on Medicaid.

The Republican issued the order Tuesday during a Cabinet meeting, saying it's part of changing the state and how people feel about their government.

Haley says she wants people to feel positive and says the phrase will put workers in a better mood while reminding them they work for the public.

No word on whether workers not using the greeting will suffer consequences.

That sounds just like the kind of happy-talk bullshit senior managers in corporate America use in lieu of decent pay raises to try and motivate their employees. What's next Governor Haley? Goofy Shirt Fridays at every Palmetto State DMV office? I'm sure THAT would improve the mood of every surly driver who has had to wait in line for three hours to get their license plate renewed.

Listen, Governor Haley...can I call you Nikki? Good. Listen, Nikki, I know you are pretty new at this Governor stuff and all. There must be a lot of pressure on you as a young female of minority persuasion elected to high public office down South where a substantial portion of the electorate still believes a woman's proper place is in the kitchen. So let ol' Billy Boy give you a little advice on this one.

You know what would make "people feel positive" whenever they interact with a state government office? If, when they first call, they actually got a hold of a live person rather than a bewildering automated menu with a couple of dozen options it takes the computerized voice three minutes just to read through.

What's that you say? Hiring additional phone receptionists costs money, which would force you to raise taxes and you're unwilling to do so?

Okay, fair enough. How about when one of your employees DOES finally answer the phone that they do so in a helpful and professional manner and then actually get the caller the information they need? That would engender a heck-of-a-lot more good will than having them drone out some empty-headed greeting as if they were auditioning for a bit part in the next remake of The Stepford Wives.

You see, Nikki, it stands to reason that if an employee is forced to say something they don't really mean, it will be very evident by the sound of their voice. Because a stunt like this isn't going to put your workers "in a better mood." In fact, it is likely to very much piss them off. That's a little bit of Worker Psychology 101, Nikki, which you yourself might have known had you ever held a real job in your life.

Lest people think that my last little barb at Governor Haley is unfair, I invite you to take a peak at her resume right off of her Wikipedia page:


Haley is a graduate of Orangeburg Preparatory Schools, and later graduated from Clemson University with a B.S. in accounting and joined the FCR Corporation (a waste management and recycling company), before joining her mother's business, Exotica International, an upscale clothing firm, in 1994. The family business grew to a multi-million dollar company.

Prep school background before going to college and then essentially falling right into the family business. Former President George Bush the Lesser would be SO proud.

Oh come on, Bill, I hear you saying. You're hardly being fair. Bush was a blueblood inbred who was born on third base and thought he hit a triple. Governor Haley, by contrast, is a dynamic young woman, a shining example of the American Dream...from a family of Indian immigrants who worked hard to BUILD something here in the Land of Opportunity. Shame on you for being so cynical.

So what you're telling me is that NOT being a well connected old white guy gets you free pass when it comes to ignoring reality and trying to prop up the facade of business as usual by making your employees' working conditions a living hell of fake optimism? Sorry, but after Obama I've grown very weary of people giving politicians a pass on their bad acts and lack of leadership simply because of their minority status.

Governor Haley has bought into the American Dream, all right. It's the same delusional Dream most people in this country apparently now have that some day it will be THEM sitting in the catbird seat able to lord it over their former fellow laborers. That's the only explanation I have for how such transparently power-craving individuals like South Carolina Governor Nikki Haley, be they aristocratic old white guys or young daughters of immigrants, keep getting elected to public office in the first place.
Posted by Bill Hicks at 6:46 AM