Taco Bell, KFC and Pizza Hut are Lobbying to Get a Piece of the Food Stamp Action 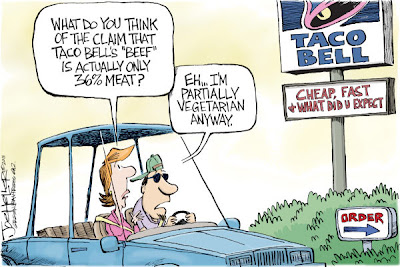 I’ve written before about the explosion in the number of Americans who participate in the Supplemental Nutrition Assistance Program (SNAP), also known as food stamps, since the beginning of the Great Recession at the end of 2007. Currently, around 45 million people receive SNAP benefits at a rate of about $133 per participant, per month. That’s nearly 15% of the total population, and is a true (rather than government/media-manipulated) indicator of the state of the economy.

And now, in a story that should be as predictable as night following day, comes a report that one of America’s worst peddlers of the junk food causing our rampant obesity epidemic has been lobbying the government to get a piece of that action. Here’s USA Today with the story:


The number of businesses approved to accept food stamps grew by a third from 2005 to 2010, Department of Agriculture records show, as vendors from convenience and dollar discount stores to gas stations and pharmacies increasingly joined the growing entitlement program.

Now, restaurants, which typically have not participated in the program, are lobbying for a piece of the action.

So why are they so hot to trot to participate? The article goes on to state:


There is big money at stake. USDA records show food stamp benefits swelled from $28.5 billion to $64.7 billion in that period.

Four states accept restaurants, with Florida the most recent to begin a program.

Ummm…I don’t wish to sound like a rude contrarian there, Mr. Blum, but it does not in fact “make perfect sense” to include your company in the SNAP program. Let me be perfectly frank with you if I may, sir. Your food is shit. It is barely fit for human consumption at all, let alone by poor people who have very limited culinary options as it is. You and your ilk are merchants of death who kill countless Americans every year through diabetes, heart disease and other obesity-related illnesses. Your company is right there with the tobacco companies, difference being that they only get their government agriculture subsidies on the producer end.

Sadly, we have become a nation so unmoored from basic common sense and decency that we could actually regard enabling someone to buy a large bucket of KFC poppers as an appropriate social welfare benefit. As it is, we already have the fattest poor people in the world because of corporate America loading much of what we eat with corn syrup and other unhealthy additives to get people addicted to the type of diets that are slowly killing them.

Make a profit getting people sick eating cheap, crappy food, and then profit again when they seek medical care and drugs to treat the resulting chronic health conditions. It’s a classic win-win right out of the Harvard Business School. For nothing in this country, not even our basic health and well being, is so sacred that you can't put a price tag on it.

The answer from the Department of Agriculture (which runs SNAP) to Yum! Brands and any other fast food chain which lobbies for approval to participate in the program should of course be: Hell No. But I’m certainly not holding my breath that it will be.
Posted by Bill Hicks at 6:42 AM