Why “Drill, Baby Drill” Won’t Save Us from High Gas Prices 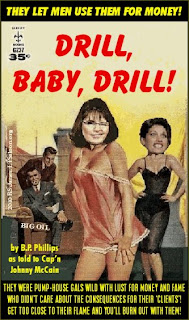 Probably the dumbest meme to arise during the 2008 presidential campaign was the catchphrase, “Drill, Baby, Drill,” as a solution to high gasoline prices. It contained all of the rhetorical elements beloved by our nation of waddling ignoramuses: a simplistic, sexually suggestive slogan guaranteed to piss off the libruls, and as an added bonus could also be turned into the title of a country music song. The morons who shouted it the loudest (while no doubt fantasizing about Sarah Palin in a dominatrix outfit) apparently believe that if we ram a drill bit into every bit of the Earth’s crust from the Arctic National Wildlife Refuge to the front lawn of Hemmingway’s house in Key West, gasoline will drop back to $1.20 a gallon again and allow them to rev the engines of their F-150 pick-‘em-up trucks at every red light as is their God-given right as Americans.

The main problem with this line of “thinking,” as has been pointed out by Peak Oil activists, is that even disregarding the environmental concerns, America’s undeveloped arctic and offshore oil fields would take many years to come online even if development were to begin immediately. Moreover, once they do begin pumping oil, production will not yield nearly enough to offset even the decline in our already-existing domestic fields. Peak Oil, it needs to be repeated ad nauseum until it reaches a level of general public understanding, does not mean we are “running out of oil,” but that the FLOW RATE of oil produced is no longer increasing and is actually beginning to decline.

Yet there is another factor which demonstrates just how little understanding the DBD knuckleheads have of how things work in the real world. Say America got really lucky and somehow discovered another “supergiant” oil field like the one on Alaska’s North Slope. Better yet, let’s say this big ol’ field is actually located in the lower 48 states and is easily accessible to drilling.

Whoo-hoo! Happy days are here again. Fire up the Hummer, Honey, we’re going for a ride! Because surely if that happened, America’s oil companies would keep all of that bounty here at home for us fine folks to enjoy, right? After all, they are good, red-blooded, freedom-loving patriots, aren’t they?

Wrong again. Man, you have a miserable track record when it comes to predicting how these things are going to play out.

Don’t believe me? Well then check out this little tidbit from an article about the high price of gasoline that appeared in the Los Angeles Times on Tuesday:


Carol Hill, a 25-year-old Los Angeles resident who works as a waitress at a Santa Monica restaurant, said she was unhappy paying $3.95 a gallon recently to fill her 10-year-old Honda Accord.

"The price of gasoline always goes up every year and never falls by as much," Hill said. "There's always some excuse someone has. All I know is that I'll be very happy the day someone hands me the keys to an electric car."

Fuel prices have been rising despite weak demand.

Energy Department statistics show that gasoline demand in the U.S. is running 157,000 barrels a day below 2010 levels. At the same time, gasoline stocks in the U.S. are down 16.3 million barrels below last year, at 208.8 million barrels, even though refinery outputs are high.

Rising inventories in periods of weak demand are one of the things that drive retail prices lower, but the refined fuels aren't staying here; they are going overseas.

In just the last few months the U.S. has become a net exporter of refined fuels, according to Energy Department statistics. That's a big change from as recently as May, when U.S. imports of refined fuels exceeded exports by 800,000 barrels a day. Most recently, exports have been running ahead of imports by 467,000 barrels a day, with much of the fuel going to Latin America and South America.

"We do know that there have been more sales overseas this year compared to previous years," said Gregg Laskoski, a senior petroleum analyst for GasBuddy.com, a price-posting website. "That has been most evident in the Midwest. When we look at the BP Whiting refinery in Indiana, which is one of the largest in the country, you see the output is strong, yet we are still seeing a lot of high prices in the markets this refinery is serving."

Laskoski added, "It's troubling for consumers to try to reconcile the high price they see at the pump when the seemingly local refineries that served them in the past are now outsourcing more of their products overseas."

Did you catch that? If not let me repeat it for the record: “the refined fuels aren't staying here; they are going overseas.” Yes, that’s right. In a year in which (according to that same article) the average price per gallon that Americans pay for gasoline is expected to set an all time high, topping even 2008, domestic oil refineries are shipping a large amount of their products overseas, inflating the cost of gasoline to a higher level than it would otherwise be if that were not happening.

You would think the DBD idiots would be OUTRAGED by this development and be loudly and rancorously DEMAINDING that the practice be stopped. And yet all we hear from them on this issue are crickets.

Why is that, do you suppose? If you answered, “Because the whole asinine campaign was funded by billionaire oil and gas interests who just want end all environmental restrictions on drilling,” you win a cookie. And now we see that they don’t even want the restrictions lifted so they can produce more oil domestically and bring price relief to American consumers. Instead, they want to suck as much of the stuff out of the ground as possible in order to maximize profits.

This would all be absolutely hilarious if the consequences weren’t so damn dire. President Obama, for example, may not have benefited from the DBD campaign, which after all was aimed at liberals and Democrats. But it was that mindset that caused his administration to give carte blanche to British Petroleum even after the worst deepwater drilling disaster in U.S. history befouled much of the Gulf Coast.

Clearly, the DBD clowns are as big a stooges carrying out the will of our corporate overlords as are the Tea Party activists. The sheer ease with which these people allow themselves to be manipulated against their own self-interest is breathtaking. Somewhere, down in the deepest, darkest depths of hell, Joseph Goebbles must be looking up at us and knowingly smirking.
Posted by Bill Hicks at 6:39 AM