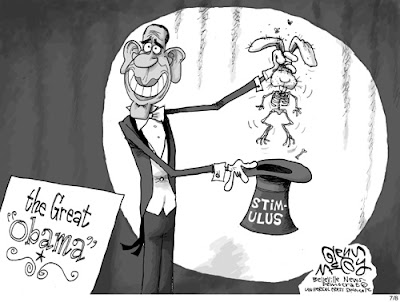 One of the silliest political flaps of Obama’s presidency was the derision heaped upon him for using a teleprompter while making his speeches, as if we were back in the days when men still wore top hats out in public and politicians routinely delivered two-hour speeches from the back of a train car to rapt audiences that they actually composed themselves rather than relying upon a whole team of speechwriters. The manufactured controversy resulted in some labeling Obama the “Teleprompter-in-Chief,” which is actually a very fitting label, just not in the way it was intended by its originators. The phrase could instead be better interpreted as meaning that Obama is really just all flash and rhetoric, but utterly without substance, which is pretty much my take on the man 32 months into his presidency.

Obama demonstrated yet again that he is nothing more than an arrogant, empty-suited con man getting by on his exceptional gift of gab last night during his long-awaited jobs speech. I say “long awaited,” merely because that’s how the media insisted upon describing it. Personally, I wasn’t waiting for it at all because I knew it was going to end up being just what it turned out to be: a whole lot of sound and fury, signifying nothing.

Let’s put aside the finer details for a moment and look at the big picture. At the beginning of his presidency, Obama pushed through the American Recovery and Reinvestment Act at a total cost of $787 billion, most of which has already been spent. Even is this age of trillion dollar budget deficits that are well beyond the cognitive comprehension of most people, that’s a lot of damn money. So what did we get as a result of all that federal largess? Anemic 2011 GDP numbers and an August monthly jobs report that came in at a big, fat zero net jobs created. Clearly, the tired old liberal trick of throwing tons of money at a problem to make it go away doesn’t work anymore.

Nevertheless, the headline for Obama’s “new” jobs proposal announced that the package was going to cost around $450 billion—or around three-fifths of the amount pumped into the economy by the Recovery Act. Upon seeing that number, the very first question that ought to pop into any thinking person’s head should be: if $787 billion didn’t revive the economy, how can we expect spending far less than that amount to work? The second question then should be: how in the hell are we going to pay for it at the same time the deficit reduction commission is planning to recommend more federal budget cuts in November?

But the inadequacy of the plan is even more obvious when you peek behind the headline number at some of the sordid details. Of the $450 billion cost of the proposal, a substantial portion will come from extending and increasing the payroll tax reduction passed last December and by extending long term unemployment benefits. I’ve written in these pages several times about how the payroll tax deduction is merely hastening the day of the Social Security program’s ultimate demise, and while maintaining long term unemployment benefits in the wake of our ongoing jobs crisis is certainly the humane thing to do, the fact is that we’re already doing both of these things without any discernible effect in turning the economy around.

So the real figure for new programs in the proposal beyond what is already being done is only about half of the headline total, or in other words less than one-third the amount of the utterly ineffectual Recovery Act. Additionally, most of the rest of the proposal contains a similar mishmash of infrastructure projects and aid to the states that made the Recovery Act such a colossal boondoggle. No word yet as to whether there are any other fraudulent but politically connected solar panel manufacturers with their hands out waiting to steal some of this loot.

If he had a single honest bone in his body and wasn’t actually a complete and utter fraud, President Hopey-Changey would have simply called this his “No Hope” speech, as that is essentially the real message he’s sending to the unemployed. But because so much of the American electorate still has its head planted so firmly up its ass, there are no doubt millions of delusional souls out there who took comfort and saw this speech as evidence that their president really cares about their plight.

So now comes the really big farce—the political fight in Congress over getting Obama’s proposal passed. Oh joy. The Republicans get to pander to their base about the cost of the program at a time of deficit reduction while the Democrats will yell and scream that the Republicans are actually in favor of “killing” the economy. The spectacle will be good for nothing more than providing the grist for partisan fundraising letters as well as for endless farcical talking head shouting matches on Fox News and MSNBC.

We in the peak oil community should take solace in the knowledge that we won’t be fooled into thinking any of this has any relevance whatsoever. The end of cheap oil means the end of the long era of economic expansion. We’ve now entered the age of permanent contraction, and no jobs program based upon defunct economic models assuming that it is possible to have infinite growth in a finite world is going to have any chance of succeeding. It would have been far better, of course, if Obama had leveled with the public about our true predicament so that people can begin to make the necessary adjustments to their lives. But since there is exactly zero chance of that ever happening, I guess we have no choice but to just kick back and enjoy the freak show.
Posted by Bill Hicks at 6:54 AM