The Automobile Claimed its First American Life 112 Years Ago Today 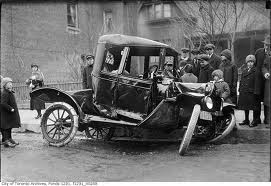 I ran across this interesting tidbit posted by a fellow blogger today:


Henry Bliss, a Manhattan real-estate salesman, became the first American to die by car more than a century ago on this day. Wired offers a fuller account of how a taxi hit him and "knocked him unconscious, crushing his skull and chest" in 1899. Bliss died by the next morning, and the driver was initially charged with manslaughter, though the charges were dropped.

I say interesting because it serves as a reminder of how relatively brief the age of the automobile has been. No invention of man has been as responsible for dramatically altering the physical landscape, particularly here in America. And yet, because of Peak Oil, the auto age is going to prove to be very brief indeed. My personal estimate is that within 20 years, nobody but the very rich will still own private autos, and by midcentury the only cars remaining will be rusted hulks littering the powered down landscape.

Oh well. Despite all of the environmental damage they have caused and the continuing carnage on the roadways, of which the unfortunately named Mr. Bliss was merely the first of millions of victims, it was actually kind of fun while it lasted.
Posted by Bill Hicks at 4:17 PM