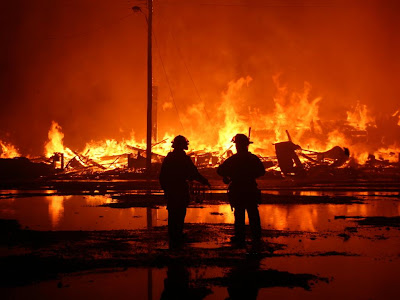 I'm doing my absolute best to ignore all of the superficial patriotism being brought out during today's 9/11 tenth anniversary remembrances. Nevertheless, I managed to stumble across a recent news story that seems perversely ironic in light of all the fetishistic worship of first responders during these ceremonies. Not that the police and fireman who responded on that day didn't do so in an heroic manner. I'm not questioning that at all. But just like with the soldiers who subsequently saluted upon being told they were going to Iraq and Afghanistan and then went and did their duty, our collective words of praise for their service ring hollow when compared to our actions.

For proof, look no further than an article that appeared on Friday on the website of a local Florida television station:


To make up for a $4 million budget deficit, Cape Coral City Council members are considering laying off members of the fire and police departments.

Previous reports have estimated up to 11 police officers and 21 firefighters could be laid off.

At least one Cape Coral Council member says layoffs are imminent, but the number of layoffs evolves every day.

Donna Weaver says hearing a siren is a reassuring sound. But soon there may be fewer sirens.

Fire station 4, just blocks from her house, could be one of three hit by budget cuts.

"To know there would be less responders is a big concern," said Weaver.

Memo to Donna Weaver: if you are really that concerned about there being fewer first responders, then you should DEMAND an immediate end to the wars in Iraq and Afghanistan and a significant draw down in the American military presence overseas. For it's now becoming dramatically obvious that by "fighting them over there" we are making ourselves far less safe over here.
Posted by Bill Hicks at 11:42 AM