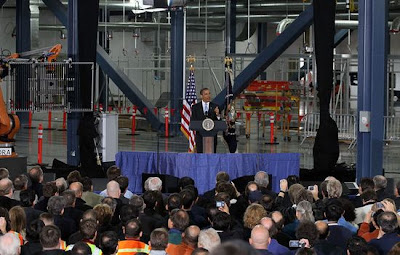 Image: President Obama gives a speech during a visit to Solyndra, Inc., on May 26, 2010

It’s becoming pretty clear in the third year after the passage of Obama’s $700 billion economic stimulus plan that the massive tidal wave of borrowed taxpayer dollars failed to kick-start the real economy as it was intended to do. Among the many criticisms of the Recovery Act in peak oil circles was that many of the “shovel ready” projects were intended to build new roads and highways when the end of the cheap oil era will in the next few decades render the automobile as obsolete as the horse-and-buggy are today.

These critics argued that if we had to go even deeper into debt in this way, a better use of the money would be to fund alternative energy and transportation projects. Peak oil author and blogger James Kunstler’s preferred strategy, for example, was to invest in rebuilding high-speed (edited for accuracy, see comment section) the nation's rail service.

Similarly, solar power has been touted as a potential source of renewable energy by the environmentally minded since the 1970s. Every day, the sun bathes the Earth with enough energy to meet all of our needs, so the argument goes. If we could only find a way to harness that energy, we could have our cake (economic growth) and eat it, too (environmental sustainability).

The problem is that nobody has yet figured out how to collect the sun’s diffuse energy in a manner that is scalable enough to replace fossil fuel-fired electrical power plants. And this is where the magical thinking begins. Certainly, the reasoning goes, if we just throw enough money at the solar power industry, it will then be able to overcome the technical obstacles and lead us to a the promised land of clean, renewable electric power.

At least that is what the Obama administration and Congress must have been thinking in 2009 when they agreed to shower $535 million ($1 million for each Member of Congress, incidentally) upon Solyndra Inc, a company that makes solar modules. So how’s that project working out two years later? Not too well, actually. Here is Bloomberg.com with the details:


Solyndra Inc., a maker of solar modules that received a $535 million loan guarantee from the U.S. Energy Department, suspended operations and plans to file for bankruptcy, saying it couldn’t compete with larger rivals.

The closely held company will seek Chapter 11 protection, Fremont, California-based Solyndra said today in a statement. It didn’t say how much it owes to creditors.

Solyndra is the third U.S. solar manufacturer to fail in a month as falling panel prices and weak global demand are driving a wave of industry consolidation. President Obama visited Solyndra’s factory in May 2010 to promote investments in renewable energy and its closure will provide fuel to critics of his policies.

“Solyndra could not achieve full-scale operations rapidly enough to compete in the near term with the resources of larger foreign manufacturers,” the company said in the statement. Its problems were exacerbated by a global glut of solar panels and slowing demand “that in part resulted from uncertainty in governmental incentive programs in Europe.”

Did you catch that? There’s a “global glut of solar panels.” And why would that be, especially at a time when energy prices have risen significantly? Perhaps because the panels don’t generate enough energy to make them worth the purchase cost? That must be it. Note the last line about the uncertainty of governmental incentive programs in Europe during this time of enforced budget austerity. Translated, that simply means that solar panels are unprofitable at current energy prices.

There’s that dreaded word again, “scalable.” In fact, the solar panels produced by Solyndra were so UN-scalable that the company blew through over half-a-billion dollars in government-guaranteed loans in just over two years and STILL went bankrupt. To be that far off the mark with your business model, you have to be either completely incompetent or totally delusional.

One thing that always makes my eyes roll is hearing an American assert that the “market will sort things out.” The reason I find it amusing is that the people who say it are always willing to listen to the market until it tells them something they don’t want to hear. In such instances, they then do stupid things like giving $535 million in taxpayer money to a hopeless enterprise because they are wishing really hard for some technology to be developed that will save us from our current energy predicament.

Solar energy has it's uses, but it is NOT going to provide electricity in the massive quantities to which we have become accostomed. The failure of Solyndra, Inc. and two other solar energy firms just this past month alone means Mr. Market is trying to warn us that we need to start powering down voluntarily right now before reality does the job for us in its own brutally efficient manner.
Posted by Bill Hicks at 6:48 AM