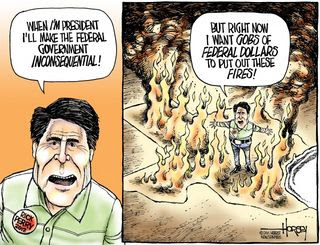 It has by now been widely reported how Texas Governor and Republican presidential campaign front runner Rick Perry gutted his state's firefighting budget just in time for the breakout of massive wildfires this summer that have consumed much of his state. Just how much those budget cuts contributed to the death and destruction recently wreaked upon Texas is a matter of debate, but it likely was not inconsequential. To recap, here are the gory details from the Huffington Post:


In Texas, firefighters aren't just battling the wild fires raging around Austin and Houston. The state's first responders have also had to deal with budget cuts affecting everything from fuel purchases to hoses and air tanks.

In some cases, fire officials say, firefighters have had to pay out of pocket for basic necessities like proper protective gear and fuel to get them to the scene. One fire department that battled the blazes in Bastrop County had to pay for a hose, recalled Bastrop City Fire Chief Henry Perry, speaking to The Huffington Post during a break from working the wild fires.

In light of the above. you might be under the assumption that Governor Perry and the Texas firefighters are political antagonists. Well, you would be wrong in the assumption. Here is another quote from the same article:


The cuts come at a time when Texas fire departments have already been slowing purchases of new fire trucks and other critical equipment as a way to save money, said Guy Turner, president of the Texas State Association of Fire Fighters. The association had endorsed Perry in his re-election for governor in 2010.

"What I fear will happen is equipment will start to fail and put our members at peril," Turner explained. "You can imagine if you're inside a structure fire and your engine quits."

Turner doesn't have to imagine it. He said he knows of firefighters whose breathing apparatus has malfunctioned during fires. There have also been "instances of hoses failing during the course of firefighting operations."

"For years, public safety was the golden calf -- that we were untouchable," Turner said. "Nobody's untouchable. It is a shame. They are basically putting a price on how much our lives are worth. It's disturbing at best."

I certainly agree with Mr. Turner that putting a price on firefighters' lives is "disturbing." But perhaps Mr. Turner ought to take a good look in the mirror and asses how it was that he gave his enthusiastic endorsement to the same man who was so willing to put that price tag on their lives. Here is a quote from Mr. Turner upon his organization's endorsement of Perry almost exactly one year ago today:


“Gov. Rick Perry has consistently supported the issues relating to public safety, and has been a dedicated advocate of health and safety for professional fire fighters and EMS workers across Texas,” said Guy Turner, president of TSAFF. "For his long friendship and support, the Texas State Association of Fire Fighters, representing almost 16,000 fire fighters and emergency medical workers in 170 jurisdictions is proud to endorse Governor Rick Perry in his bid for re-election.”

Guy Turner should immediately resign. And if he refuses to do so, then the 16,000 firefighters and emergency medial workers he claims to represent should DEMAND his resignation. You cannot blunder this badly in looking out for your organization's best interests and still be taken seriously as its president.

Nevertheless, I wouldn't wager a nickel that Mr. Turner, or Perry for that matter, will suffer very much politically as a result of this scandal. For whatever reason, Americans have completely lost the ability to demand accountability for anyone who rises into a supposed leadership position in this society, just so long as they are not involved in a sex scandal. Perry will continue to score points on the campaign trail by bashing the government despite the dramatic evidence of the damage his actions have wrought upon his own state.
Posted by Bill Hicks at 11:56 AM