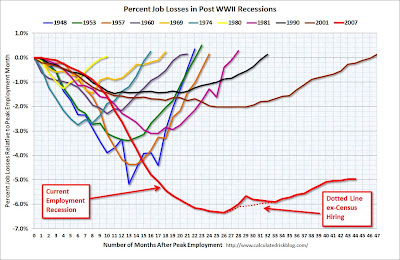 Here is the sad, sorry tale from Calculated Risk regarding the Bureau of Labor Statistics's monthly jobs report for August:


Nonfarm payroll employment was unchanged (0) in August, and the unemployment rate held at 9.1 percent, the U.S. Bureau of Labor Statistics reported today. Employment in most major industries changed little over the month. Health care continued to add jobs, and a decline in information employment reflected a strike. Government employment continued to trend down, despite the return of workers from a partial government shutdown in Minnesota.

A few highlights of note. The statistical tweaking of the "Birth Death" model added 87,000 unverifiable jobs to the monthly total, so that real figure is likely below zero (though you can't just subtract the 87K and get an accurate figure). Additionally, two previous months' data were revised downward, as later revisions almost always are, so don't be surprised when today's number turns negative in next month's report. Also note that "government employment continued to trend down," reflecting the effects of budget austerity nationwide.

Now it is finally conformed: the recession that began in 2008 never ended. Trillions of dollars were borrowed and spent by the federal government that merely bought us a couple of years of stabilization before the crash resumed. Don't give me any guff about how it's not "officially" a recession unless we experience two consecutive quarters of negative GDP. First of all, as I've written before, without the insane levels of federal deficit spending, GDP levels would still be deeply in the red. Secondly, all of that nonsense about a "jobless recovery," was just that--nonsense. Without jobs, people don't earn money, hence they cannot go to the mall and spend, hence our consumer based economy cannot grow. It's as simple as that.

This will of course put more pressure on our "leaders" to "do something." In fact, President Hopey-Changey is scheduled to give a televised jobs speech next Thursday in which you can expect him to trot out the same tired old phrases about how we need to get the country moving again. What he won't say is anything about corporate America offshoring jobs to China and other locales. Nor will he say anything about how bailing out the big banks and Wall Street did NOTHING to help the unemployed. And, most importantly, he won't say anything about how the end of the era of cheap oil has changed the game from long term economic growth to long term permanent contraction.
Posted by Bill Hicks at 9:18 AM