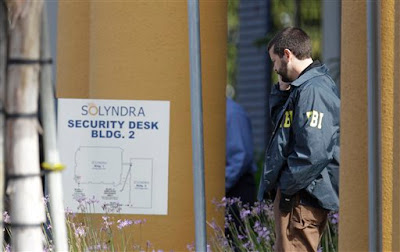 In my September 1st post, "Half-a-Billion in Taxpayer Dollars Down the Drain for a Solar Energy Pipe Dream," I wrote about the bankruptcy of the Solyndra corporation a mere two years after the company received over a half-a-billion dollars in loan guarantees from the Department of Energy. At the time, I concluded:


To be that far off the mark with your business model, you have to be either completely incompetent or totally delusional.

Guess I spoke a little too soon, as there was actually a third possibility: rampant fraud. Here's Bloomberg with the story:


The FBI raided the headquarters of Solyndra LLC, the solar-panel maker that failed after receiving $535 million in loan guarantees from the Obama administration.

Republican lawmakers said after the raid that the administration made misleading claims about the company’s prospects, and Democrats said the company’s chief executive officer withheld information on its financial plight.

The Energy Department gave the Fremont, California-based company the most federal backing awarded a solar manufacturer. One of the principal investors in Solyndra is a foundation headed by billionaire George Kaiser, a campaign supporter of President Barack Obama who made 16 visits to the president’s aides since 2009, according to White House visitor logs.

The Federal Bureau of Investigation executed a search warrant today with the Energy Department’s inspector general, bureau spokeswoman Julie Sohn said in an interview. Sohn said she couldn’t provide details about the investigation. Solyndra filed for bankruptcy protection on Sept. 6 with liabilities of $783.8 million, after shutting its factory and firing 1,100 people.

The raid's timing couldn't have been any more awkward for President Hopey-Changey, coming on the same day as his jobs speech in which he is widely expected to offer up a plan to throw more money around willy-nilly in a futile attempt to restart the broken American jobs machine. This story also has the potential to blow up into a major political scandal for Obama. Stay tuned.
Posted by Bill Hicks at 5:41 PM