Dollar Stores Are Winning the Final Retail Race to the Bottom 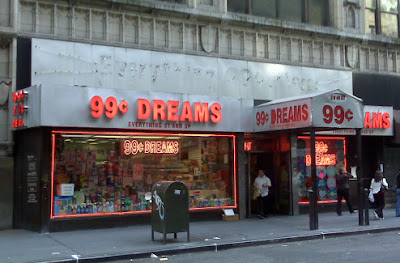 I came of age during the 1970s, just as American retailing was entering its golden age. The first big indoor shopping mall opened up in the nearby Illinois city of Rockford about the time I became a teenager. I still remember how thrilled I was when my dad took us all there for the first time on the day after Thanksgiving to do our Christmas shopping. Back then, "Black Friday" was an as yet uncoined term, and we did not wrestle or get into fistfights with our fellow shoppers over the last deeply discounted toaster oven or hand held video game.

In fact, I don't remember buying very much at all on that trip as I was still a kid and didn't have a whole lot of money. It was enough of a joy just to walk up and down the length of the biggest building I'd ever been in up until that time gazing upon all the merchandise I would ever have thought I'd want to buy.

Back in my hometown of Freeport, Sears and JCPenney were the two department stores where most people did their shopping. We were a solidly middle class family, which meant that probably half the stuff in our house came from one or the other. About the time I entered high school, a K-Mart opened up on the other end of town. I didn't think too much about that, but I noticed my parents would rarely ever go there.

Freeport managed to survive without a Wal-Mart until after I left for college in the late 1980s. And though I wasn't aware of it at the time, Wally World and K-Mart combined over the next decade or so to slowly strangle the old, historic downtown business district in a way that Sears and JCPenney never did.

For a long time in America, it appeared as though the omnipresent Wal-Mart--with its low wages, lack of employee benefits and ruthless business practices--represented the bottom line-driven endgame for American retailing. No matter how much the chain contributed to undercutting and driving mom-and-pop stores all over the country out of business, consumers still flocked there searching for bargains.

But now, as the Great Recession lingers and deepens, even Wally World is starting to come under pressure. Just how much pressure was reported in a Reuters article on Monday about a public opinion poll showing that holiday shoppers are planning to cut back this year. Here's the relevant snippet:

"Retailers better be worried about Christmas. If half of Americans believe it is going to be worse before it gets better, they may not be too excited about buying much this Christmas season," Britt Beemer, president of America's Research Group, said in an interview.

The holiday selling season is vital for U.S. retailers as many of them make as much as a third of their annual sales in that period.

"This is not the kind of number that retailers want to have going into November 1 or they are going to be in big trouble," Beemer said. "They are going to have to give consumers better deals earlier."Fewer pay raises, falling home values, rising prices for food and other goods, and political gridlock in Washington are all taking a toll on Americans, Beemer said.

"Not that there is no hope at the end of the tunnel, but the light is very, very dim," he said.

Post-recession American shoppers are extremely sensitive to price and increasingly venturing beyond discount chains while hunting for bargains.

That is bad news for mass merchandisers such as Wal-Mart, Target Corp, Family Dollar Stores Inc and Dollar General Corp.

"Anybody who is another discounter that sells commodities is vulnerable," Beemer said. "Dollar stores are attacking them at their lowest price level.

First the department stores succumbed to the discount stores, and now the discount stores are succumbing to the dollar stores. When millions of American shoppers no longer feel prosperous enough to go to Walmart, the final collapse of the American consumer-based economy surely cannot be too far away.
Posted by Bill Hicks at 6:35 AM