Why is Labor Day Still a National Holiday? 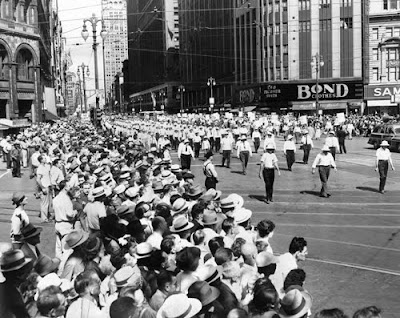 It’s fitting that this Labor Day weekend in America started with a disastrous monthly jobs report. In a perversely delicious irony, the Bureau of Labor Statistics reported on Friday that the country created zero net jobs during August. It’s fitting because that is exactly the amount of meaning that Labor Day has for the vast majority of Americans these days—zero.

Instead, the holiday has come to merely symbolize the end of summer every year. The kids are heading back to school, and most people treat it as one last chance to break out the backyard barbeque grill or head to the beach before the onset of the cold weather. It also marks the annual return of America’s true religion, the one in which oversized men slam repeatedly into each other pushing an elongated sphere up and down a field while rowdy crowds howl for blood as during the gladiatorial contests of ancient Rome.

Very few ever pause to reflect upon what this day is really supposed to mean. On Memorial Day, we honor our fallen heroes. On the Fourth of July, we wave a flag and shoot off fireworks to celebrate the country’s date of independence. But on Labor Day, we what? Hmmm…that’s kind of a head scratcher, come to think of it.

I’m a pretty well educated person and widely read to boot, but I have to admit that before I began writing this piece I had only a fuzzy notion as to what Labor Day was really all about. I figured it must have something to do with the long-defunct American labor movement, but beyond that I was pretty vague. Fortunately, in this day an age, we have Wikipedia to provide the quick answer:


It became a federal holiday in 1894, when, following the deaths of a number of workers at the hands of the U.S. military and U.S. Marshals during the Pullman Strike, President Grover Cleveland put reconciliation with the labor movement as a top political priority. Fearing further conflict, legislation making Labor Day a national holiday was rushed through Congress unanimously and signed into law a mere six days after the end of the strike. The September date originally chosen by the CLU of New York and observed by many of the nation's trade unions for the past several years was selected rather than the more widespread International Workers' Day because Cleveland was concerned that observance of the latter would stir up negative emotions linked to the Haymarket Affair which it had been observed to commemorate. All U.S. states, the District of Columbia, and the territories have made it a statutory holiday.

Interesting. I would have expected the holiday to have instead come into existence much later, such as during the New Deal era when the protection of workers from blatant exploitation by amoral capitalists had finally become part of the political consensus. Instead, it dates all the way back to the days before Teddy Roosevelt’s trust-busting when the Robber Barons still ruled the economic landscape. Note too, that 117 years ago we had a Democratic president who was willing to take a much braver stance in favor of the workingman than the craven fraud who occupies the Oval Office today.

For me this then brings up a more disheartening question, which is why do we continue to celebrate Labor Day at all? Thirty years of concerted right wing rhetorical attacks against unions and worker benefits and protections, put into action by their hand-puppet politicians, have utterly destroyed what remained of the American labor movement. All that's left today is a hollow shell. Don't believe me? Well then, ask yourself when was the last time there was a major strike in which the employees actually managed to win any real concessions from management.

It started symbolically when President Reagan fired the air traffic controllers in 1981, and then made anti-union rhetoric politically popular among the very same people who had benefited from the unions’ hard fought historical victories. But the biggest blow came with the mid-1990s free trade agreements, pushed through under Bill Clinton in the name of globalization, that struck down the last barriers to allowing corporate America to fully exploit the vast pool of cheap labor that existed beyond our borders. As with so many such policies wreaking havoc in modern day America, a Republican president started us down the path only to have a Democratic president finish the job. The assault upon labor was a truly bipartisan effort, as it needed to be in order to have any chance to succeed.

Today, of course, the deck is now completely stacked against the workers and in favor of capital. The moneyed interests enjoy total control over the political system, as demonstrated by the fact that President Hopey-Changey is in the process of raising a billion dollars in Wall Street and corporate cash for his reelection effort. Those Americans who haven’t already lost their jobs live in fear that they may be the next ones on the chopping block—and so they passively accept such abuses as being required to work mandatory overtime sans compensation. And if they are foolish enough to complain, they will quickly be ushered out the door to join the many millions of their fellow countrymen in a bleak economic landscape that by the government’s own manipulated and untrustworthy statistics created exactly zero net jobs this past month.

Labor Day has become nothing more than a cruel joke played upon the American worker. For further proof, just look back to its Wikipedia entry:


The form for the celebration of Labor Day was outlined in the first proposal of the holiday: A street parade to exhibit to the public "the strength and esprit de corps of the trade and labor organizations," followed by a festival for the workers and their families.

Instead of a parade and a festival in their honor, on this very day millions of retail salespeople will trudge off to their jobs, working long hours to keep the American consumerist machine functioning while neither they nor their customers give any thought whatsoever to the appropriateness of the stores even being open. For that, my friends, has become the new American Way, and woe to the worker who tries to emulate his or her forbearers and put up any kind of protest about this appalling state of affairs.
Posted by Bill Hicks at 7:36 AM