The Dumbest Liberal Defense of Obama Yet: “He’s a Bigger Tax Cutter than Reagan!” 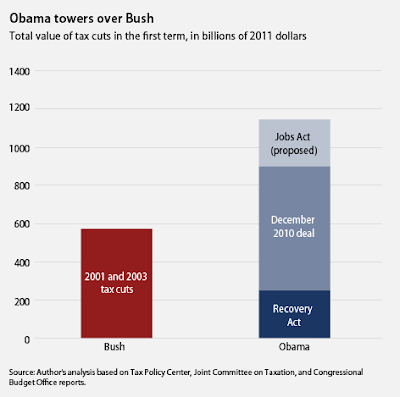 Fair warning, dear reader. I’m about to go on one of my periodic rants against liberals and progressives. And yes, I do so not because I’m a wingnut Neanderthal, but because as a former member of the leftist political tribe, I know that their minds ought to be open enough to free themselves from conventional political dogma—yet most of them still stubbornly refuse to take the red pill.

Take the Daily Kos, for example. The blogosphere’s most notorious left wing rabble rousing site is one of the few outside of the Peak Oil community that has published serious and thoughtful articles on the subject. Still, even though it should have been obvious long ago that there will be no solutions imposed through the political system and that nearly all American elected officials remain in deep denial about the most important issue facing the country today, the Kos insists upon playing the political game as if it still matters.

Most Kos-ies are no doubt feeling very much stung after having fallen so hard for President Hopey-Changey only to have him kick their stated values square in the nuts at every opportunity. Even so, that doesn’t stop them from acting like an abused wife and reflexively sticking up for the guy whenever they can. It was bad enough that the Kos did some rah-rahing for Obama’s great and glorious “victory” in Libya and for his wanton assassination rather than capture and trial of Osama Bin Laden (though in fairness, the readership’s opinion was clearly divided on those issues), but a post from last Thursday contained their most laughably inept defense of the man yet:


The Center for American Progress crunched the numbers and discovered:

With the huge Recovery Act tax cuts and the enormous December 2010 tax cuts combined, President Obama has already signed into law tax cuts amounting to more than $900 billion from 2009 through 2012. Even after accounting for legislation that the president signed that increased revenue during that period, President Obama has cut taxes by more than $850 billion in his first term, or approximately 1.5 percent of GDP.

That is compared to the $474 billion in tax cuts enacted by George W. Bush in his first term. If the latest tax cuts included in President Obama's American Jobs Act are passed, he will be the biggest tax cutter of the modern era. Bigger than Reagan. Bigger than Bush. That's saying something!

Yet, despite this fact, we've seen poll after poll indicate that people still believe President Obama has raised their taxes.

1). The idea that tax cuts bring economic growth should be thoroughly debunked by now. But it isn't.

2). It has to be political injustice of the worst order to be the biggest tax cutter ever and not get any credit.

Whoo-boy. Where to begin? How about starting with the fact that the Mighty O’s payroll tax cut has already caused Social Security’s revenues to plunge deep into the red and has hastened the eventual demise of the Democratic Party’s signature social welfare program? Maybe we could add the fact that Obama’s reckless tax cuts have greatly contributed to the insane levels of federal deficit spending the past three years and caused “austerity” to become the political buzzword of the day.

That would make a heck of a lot more sense than giving the Teleprompter-in-Chief “credit” for being such a big tax cutter. Maybe, just maybe, the Kos should instead be excoriating him for engaging in such reckless fiscal policies in the first place. Since the public is dimwitted enough to believe that he raised their taxes anyway, he should have gone ahead and actually done so, especially on those with the most ability to pay. Then perhaps the government wouldn’t be in nearly as dire financial straits as it is now.

Sadly, it’s this type of malarkey that keeps disgruntled lefties hanging out within the tent of a Democratic party that actually threw them out into the cold around the time the dust settled from the George McGovern electoral debacle in 1972. Obama is shoring up his liberal/progressive base for the upcoming election solely by pointing to the likes of Perry and Bachmann and shouting, “OOGA-BOOGA!” And still, like that beleaguered wife with the black eye and the split lip, the liberals and progressives refuse to press their very legitimate charges and rightfully abandon him to his electoral fate.

Both sides of the political spectrum need to wake the fuck up and come to recognize that they have much more in common with each other than either does with the likes of Obama and Pelosi, or McConnell and Boehner. For one brief, shining moment in September 2008, for example, representatives from the far left and far right came together on behalf of the taxpayers and defeated the hideous bankster giveaway known as the TARP law. And when it passed on a second try after a bunch of corrupt wheeling and dealing, the public should have then stood up for itself by voting out of office every Congressman and Senator up for reelection that November who voted “Yea," regardless of party affiliation. As long as us non-millionaire and billionaires remain politically divided against each other, we’re doomed to increasingly suffer from financial exploitation at the hands of the elites, until the day finally arrives when the whole corrupt system comes crashing down around us all.
Posted by Bill Hicks at 6:52 AM