Fear and Loathing in the Auto Industry: The Flacks Can’t See What’s Right in Front of Their Eyes 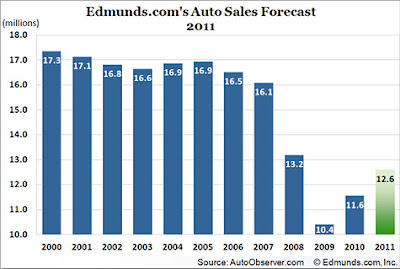 One of the most shortsighted policies enacted by our so-called “leaders” in response to the financial crisis was the bailout of the automobile industry. The end of the cheap oil era and the onset of the world wide peak in oil production means that the long term trend in gasoline prices is heading in one direction: up. Additionally, the economic devastation the crisis has wrought among so many working and middle class Americans means that many will likely never again purchase a new car during their lifetimes. For those of us who are Peak Oil aware, these are accepted facts that are beyond dispute.

So it was with great interest yesterday that I read an article from Fortune magazine entitled, “The Incredible Shrinking Auto Boom.” I actually got excited for a second, thinking that maybe this was an example of a mainstream media publication actually beginning to report our true predicament. How silly I was. Nevertheless, things started off promisingly:


Fears of a global recession, brought on by slowing China growth and financial panic in Europe, are dampening hopes for a strong U.S. recovery in auto sales.

That could have consequences that ripple far beyond Detroit, Wolfsburg, and Toyota City.

Ummm…yup. Anyone with two brain cells to rub together should have been able to foresee that, please continue:


Until very recently, autos have been holding up as one of the few bright spots in U.S. manufacturing. New assembly plants are opening and automakers are adding to their payrolls. Autoworkers have entertained visions of fat profit-sharing checks as they concluded contract negotiations with GM and continue them at Chrysler.

What’s amazing about the quote above is how quickly Americans seemed to forget about the oil price spike of 2008, and started buying new cars again as soon as gas prices plummeted in the wake of demand destruction caused by the effects of the Great Recession. The chart above shows that auto sales WERE starting to recover. Apparently, though, none of the optimists were taking note of the fact that gasoline prices began to relentlessly march upwards again late last year, or perhaps they might have dampened their enthusiasm. It is on exactly this point that the author of this article, who has the unfortunately aristocratic sounding name of Alex Taylor III, really demonstrates his stupidity:


As recently as April 25th, I wrote approvingly about anew forecast from IHS Global Insight that had car sales under one scenario climbing steeply to 17 million by 2015. It foresaw a healthy economy expanding at roughly 3% per year and creating two million new jobs annually. Its reasoning was that years of below-average sales would create pent-up demand that must be satisfied as long as automobiles remain a primary mode of transportation.

Wow…talk about an example of why you should never; EVER take financial advice from a mainstream media publication. According to my buddies at GasBuddy.com, the average price of a gallon of gasoline on April 25th, the very day Sir Alex Taylor III wrote his unfortunate bit of optimistic prognostication, was around $3.85, a mere quarter from its all time high in the summer of 2008. Was Alex Taylor III completely asleep during that whole time and does he really not recall how the financial system imploded less than two months after they hit their peak that year?

I guess, being a Senior Editor at Large for Fortune magazine (a title which kind of makes him sound like a bank robber on the lam), Mr. Taylor III doesn’t get out much. Or at least, he doesn’t get out much to neighborhoods where people actually work for a living. If he did, he might recognize that working and middle class Americans are struggling with layoffs, bankruptcy, foreclosures and related maladies, and hardly have the excess spending money to be able to afford to run annual auto sales back up into the 17 million range.


Independent analyst Warren Browne of Automotive Compass has been figuring on 2011 sales coming in around 12.5 million since February. Based on some new work he has done that ties auto sales to GDP growth, he sees 2012 sales stalling at 13.2 million. He's assuming annual GDP growth of only 2.5% for the rest of the decade and autos not peaking in the current economic cycle until 2019.

"The current automotive cycle is operating below trend," Browne writes. "There is not enough economic support to alter this path for at least a few years.

You see the problem? Even when these people are supposedly being realistic, they still don’t have a clue what the fuck they are talking about. Annual GDP growth of 2.5% for the rest of the decade? Auto sales peaking in 2019, when worldwide oil production will likely already be in steep decline from today’s levels? Sorry, Mr. Browne, we’ll be lucky if there still IS an American auto industry by 2019.

Reading this article served as a good reminder just how pervasive business-as-usual thinking is despite all of the mounting evidence that we have reached a key turning point in our history in which economic growth is finished. The likes of Alex Taylor III and Warren Browne will no doubt continue to spew their nonsense until the day finally comes that they lose their own jobs and reality finally pierces the media bubble of their own creation.
Posted by Bill Hicks at 6:59 AM