Obama's Small Campaign Donors are Finally Giving Up on Him 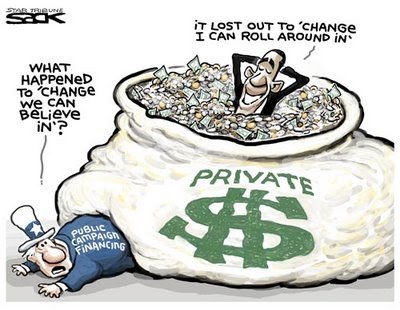 Way back on May 27th, I posted a Friday Rant entitled "Thinking of Making a Presidential Campaign Contribution? If So, You’re an Idiot," in which I asserted that anyone who is not a millionaire or billionaire should just save their money rather than contributing to one of the presidential campaigns. In particular, I was thinking about President Hopey-Changey, about whom I asserted:

Well, it appears the realization IS finally starting to dawn upon some of those small donors that Obama was simply playing them for suckers. Here is the scoop from the New York Times yesterday:


They were once among President Obama’s most loyal supporters and a potent symbol of his political brand: voters of moderate means who dug deep for the candidate and his message of hope and change, sending him $10 or $25 or $50 every few weeks or months.

But in recent months, the frustration and disillusionment that have dragged down Mr. Obama’s approval ratings have crept into the ranks of his vaunted small-donor army, underscoring the challenges he faces as he seeks to rekindle grass-roots enthusiasm for his re-election bid.

In interviews with dozens of low-dollar contributors in the past two weeks, some said they were unhappy with what they viewed as Mr. Obama’s overly conciliatory approach to Congressional Republicans. Others cited what they saw as a lack of passion in the president, or said the sour economy had drained both their enthusiasm and their pocketbooks.

For still others, high hopes that Mr. Obama would deliver a new kind of politics in his first term have been dashed by the emergence of something that, to them, more resembles politics as usual.

“When I was pro-Obama in 2008, I was thinking of him as a leader who could face the challenges that we were tackling,” said Adnan Alasadi, who works in behavioral health in Mesa, Ariz. Mr. Alasadi contributed repeatedly to Mr. Obama during his first campaign but says he will not give the president — or anyone else — any more money.

“Now I am seeing him as just an opportunistic politician,” Mr. Alasadi said.

Better late than never there, Mr. Alasadi. Your new stance is exactly the right one to take. Neither Obama nor any of his Republican challengers intend to lift a finger to help you or anyone else who does not have a seven-figure bottom line. Class warfare is raging in America these days and the rich are winning hands down. It's time for the rest of us to take the first step by not giving any more of our hard-earned money to their political hand puppets.
Posted by Bill Hicks at 12:49 PM