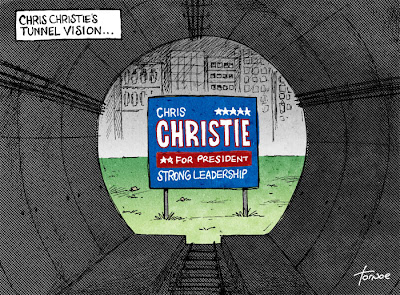 In my September 16th Friday Rant, "Yo, New Jersey, Y U B Giving Snooki a Tax Credit?" I called out New Jersey Governor Chris Cristie for saying he couldn't veto a $420,000 state tax credit for the utterly insipid reality teevee show, Jersey Shore, despite the fact that cities in his state have been laying off teachers and police officers in large numbers. Well, according to a report yesterday by Talking Points Memo, since then Christie apparently decided to grow a pair:


New Jersey Gov. Chris Christie (R) has vetoed a $420,000 "Jersey Shore" production credit that was criticized by local lawmakers as a "fake tanning" tax break and "a terrible, terrible and misguided waste."

"I have no interest in policing the content of such projects," Christie said in a press release. "However, as chief executive I am duty-bound to ensure that taxpayers are not footing a $420,000 bill for a project which does nothing more than perpetuate misconceptions about the State and its citizens."

Hmmm...why the change of heart all the sudden? You don't suppose...yep, that's right, someone is looking to throw his hat, as well as his considerable girth, into the President ring. Here is Talking Points Memo again:


There’s a lot of buzz around a Chris Christie run this week, thanks mostly to an all-out effort by big money Republicans to recruit him for a run.

So who are these guys? In July, Christie attended a meeting with a “who’s who A-list of successful fundraisers,” as FOX News put it to discuss a possible presidential bid. The group reportedly included several billionaires, including its host, Home Depot co-founder and venture capitalist Kenneth Langone, who appears to be the most enthusiastic driver of the Christie boomlet.

Langone, 76, has emerged over the last two years as one of the loudest critics of President Obama’s Wall St. vs. Main Street rhetoric. At a CNBC Town Hall last year, Obama himself was asked about Langone’s statement that the White House should stop making “people in business feel like we’re villains or criminal.” The President replied that he was “absolute not” vilifying the private sector, noting that he’s cut taxes on businesses repeatedly. Langone isn’t a total hardliner, however: he endorsed raising taxes on the rich during debt ceiling negotiations so long as the revenue was dedicated entirely to helping pay down the deficit.

New York hedge fund billionaire Paul Singer is also named by Politico as one of the leaders of the latest Draft Christie movement. Singer was a major fundraiser for both George W. Bush’s and Rudy Giuliani’s presidential campaigns. He also bankrolled an unsuccessful 2007 effort in California to try to pass a ballot measure ending the winner-takes-all system for California’s electoral votes, which would provide a massive boost to Republican presidential candidates. Like Langone, he has a moderate streak as well: he helped fund efforts to pass New York’s landmark law allowing same sex marriage this year.

Another key Christie backer: FOX News CEO Roger Ailes. According to New York Magazine, Ailes begged him to run before the presidential race got under way and brokered a meeting between Christie and Rush Limbaugh.

Oooh...it looks like the Republican faction of The Big Money Boys has quickly soured on the odious Rick Perry, who so convincingly proved himself to be Not Ready for Prime Time. So in their desperation to back anyone other than Mitt Romney, who is seriously disliked by social conservatives, they are now turning to the caustic, half-term governor of New Jersey.

Look no further for an example of just how broken our political system is than the repeated meteoric rises and crashes this presidential election cycle of candidate after candidate on the Republican side. At one time or another Sarah Palin, Donald Trump, Michelle Bachmann and Rick Perry were all touted as the "savior" of the party by conservatives, briefly led in the polls among likely Republican primary voters, and then crashed and burned once the media actually began to pay attention to the endless stream of stupid things coming out of their mouths.

Christie might fare a little bit better than the rest of them because he seems to be somewhat more politically adroit, as his conveniently-timed veto of the "Snooki Subsidy" shows. But by being so openly courted and touted by Wall Street players and by Fox News, it is obvious that no one who is not a millionaire of a billionaire should ever be duped into thinking he is on their side.
Posted by Bill Hicks at 3:12 AM