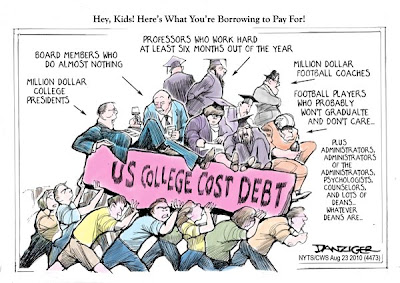 I'm going to get this out of the way right up front: the time-honored American Dream of parents sending their kids off to college so they can get a higher education that will allow them to live better than they did is dead as doornail. Just how bad is it? CNN reports in an article entitled "Stop the Tuition Madness":


For parents with college-bound kids, it seems like a no-win situation. Your child is eyeing the grassy quads and Gothic dorms of Dream U., while you're staring down at a too-small 401(k), a shaky job market, and a house worth a lot less than a few years ago.

Meanwhile, colleges are bidding up tuition prices faster than a hedge fund manager at an art auction. Over the past 10 years the cost of private college has jumped more than 60%, nearly three times as much as incomes over the same period, and will now set you back $42,000 a year on average.

Prices at public colleges have shot up even more, nearly doubling to $21,000 for in-state students. Got younger kids? By 2020 you're looking at a four-year bill that's likely to top $240,000 for private schools and $155,000 at public universities. Sure there's financial aid, but scholarships aren't keeping up with tuition inflation. So long, retirement hopes; hello again, boss.

Your children will suffer, too, if they're forced to start their adult lives with onerous debt. "Student loans can affect every decision young adults make: whether they can go to graduate school, buy a house, even start a family," says Patrick Callan, president of the Higher Education Policy Institute.

I actually have one nit to pick with that excerpt from the story. There is no way college tuitions are going to rise from their already lofty heights to those insane levels by the year 2020. It should be obvious that we are already reaching the point of Peak Higher Education, in which the mounting price tag for even a Bachelor's Degree at a public university is rising beyond what's affordable for most people even with student loans. The $155,000 figure cited as the future cost for a four-year degree is about three-and-a-half times the current median annual household income (around $45,000).

At some point, the growing consciousness that a college education no longer guarantees a good salary or even any employment at all upon graduation is going to reach critical mass, and enough students (and their parents) are going to balk at taking on a six figure debt only to end up at best waiting tables at Applebees five years later. Once that happens, the higher education system in its current form is going to collapse.

Many will lament its passing, but it really is for the better. Except in rare instances, universities long ago largely stopped being places where students could learn for knowledge's sake and expand their minds to become better citizens. Instead, a university degree had become merely a ticket that needed to be punched to gain admittance into the white collar corporate world.

The rapid rise in tuition costs, which for well more than a decade have greatly exceeded the rate of inflation, very much encouraged the transformation of our universities into mere job factories. Even if obtaining a high paying job wasn't a student's first motivation for attending college, it likely moved high on the list once they started to realize how much debt they were going to have to take on to obtain that degree. As for the colleges themselves--beyond enabling big, fat pay raises for administrators, professors and football and basketball coaches--the need to keep their cash cows from dropping out no doubt also greatly contributed to the grade inflation that has turned, for example, attaining a "B" average from a genuine academic achievement into a complete joke.

The CNN article actually goes on to propose a list of potential solutions for curbing college costs, which wouldn't be half-bad if we were still living in "normal" times. I particularly like the idea of cutting way back on the expensive college football programs. Sadly, however, like most mainstream media articles this one assumes that the system can be "saved" by making a few tweaks here and there, when in truth the effects of peak oil and resource depletion and the fact that we have now entered the age of permanent contraction means that the system itself is soon going to follow the old Communist bloc into the dustbin of history.
Posted by Bill Hicks at 6:52 AM