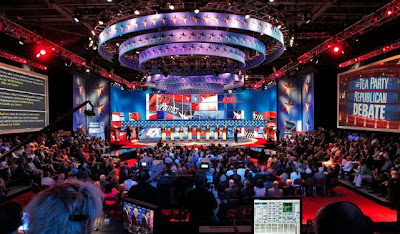 A lot of people were taken aback last week at the audience reaction to a question posed by Wolf Blitzer, the moderator of the Tea Party Republican Presidential debate, to Representative Ron Paul about whether a 30-year-old man in a coma who had refused to buy health insurance should be allowed to die. The audience appallingly cheered its approval at the idea, and the Good Doctor answered by blathering on about how everyone needs to take “personal responsibility” and not look to the government as their savior.

I actually thought the question was unfair and was designed by Blitzer to elicit just such an audience response. Very few people who make a six-figure salary would ever be so daft as to refuse to pay for health insurance. A far more accurate question to ask Dr. Paul would have been if he favored letting a 30-year-old man die who COULDN’T AFFORD health insurance because he was working at a minimum wage job. It would have been interesting and far more enlightening to hear the lunkhead audience members’ reaction to that much more realistic scenario.

All of this reflects a very ugly undercurrent that is now flowing within not just American politics, but around the Western world as the post-World War Two welfare states come under increasing strain from the economic effects of Peak Oil and resource depletion. Most people may not understand WHY their goodies are slowly being taken away from them, but they are NOT happy about it nevertheless. This could explain the following scary story out of Great Britain that appeared on Thursday in The Guardian newspaper:


There is little doubt that disability hate crime is on the rise. A recent Equality and Human Rights Commission report concluded that "people with disabilities in the UK face harassment, insult and attack almost as a matter of routine, while a collective denial' among police, government and other public bodies means little is done to challenge the situation".

This is strong language. It seems so shocking that we might decide that it cannot possibly be true. Turn then to the Mencap study that found police were consistently failing the victims of disability hate crime, or to the Scope report that concluded that "widespread casual and institutional disablism in Britain creates the conditions where disability hate crime can flourish without being recognised or challenged".

According to a ComRes, some 47% of disabled people surveyed said that attitudes towards them have worsened over the past year while 66% claimed that they had experienced "aggression, hostility or name-calling". Taken to its extreme, this bullying leads to the tragic deaths of people such as Fiona Pilkington and Francecca Hardwick, Gemma Hayter and Keith Philpott.

But while the causes of hate crime are hard to fathom, we should look first to the attitudes of those who govern and inform us. A recent select committee report criticised both the press and the department of work and pensions over the way in which the media covers statistics on sickness benefits. Articles referring to "the shirking classes", "scroungers" and "skivers" led the chair of the committee, Dame Anne Begg, to write to the DWP urging staff to be careful how they present statistics.

This is not just a problem in the UK, or even a recent problem caused by any one political party, but one faced by disabled people in France, Italy, Australia and elsewhere, as governments attempt to reduce the number of people claiming benefits by taking a "tough line". Is it any surprise that our neighbours feel less supportive if they are asked on a monthly basis to believe that most disabled people are simply "lazy", "fraudulent", "feckless" and "workshy"?

No, I must say that it is indeed no surprise at all that in this time of economic hardship there is an increase of abuse directed towards those who may be viewed as “parasites” upon society.

I’ve written before about Joe, my best friend from high school who was laid off from his retail manager’s job at the beginning of this year and was unemployed for eight months. Joe’s wife was still employed and retained her health insurance, which is lucky because their son has been a quadriplegic since being the victim of a horrible automobile accident when he was a baby. The kid’s an adult now, though still young enough to be on his mother’s health insurance. This is fortunate because he needs to be hospitalized for several days two to three times a year to have his lungs drained of fluid and undergo other unpleasant procedures just to stay alive.

In a couple of years, Joe’s son will be too old to remain on his mother’s health insurance policy and will have to switch over to the Social Security Disability Insurance program. At that time, his continued eligibility to receive social welfare benefits will literally be a matter of life and death. There is no way he’d ever be able to obtain his own private health insurance policy when he needs probably hundreds of thousands of dollars of medical treatment every year.

So this is the challenge I would issue to Dr. Paul as well as to any asshole who would selfishly cheer on denial of care to an uninsured deathly ill or disabled person. Have you really stopped to think through exactly what it is you are advocating? Are you prepared to look Joe’s son, who worked very hard to become an Eagle Scout despite his disability, in the eye and tell him he has to die in order to keep your taxes from going up? Because if not, or if you don’t have the guts to face up to it, then you really should just shut the fuck up.

The real problem with the health care system is not the uninsured, but the profit motives of the drug companies, insurance companies and hospitals that are driving up costs for even basic care far beyond the ability of the average person to pay. In my own personal case, my self-only health insurance policy has risen in combined cost for me and my employer from just $1300 annually fifteen years ago to over $6300 this year. That’s an astonishing 485% increase; far above the rate of inflation. And even with my health insurance now costing over $500 a month, I still have out-of-pocket expenses and essentially NO dental coverage.

Peak oil is, of course, eventually going to wreak mass havoc on our society, and many people are going to suffer and die as a result. The disabled are going to be particularly vulnerable. That’s reality. There is a big difference, however, between that eventuality and allowing a still young and viable human being to die out of nothing more than sheer greed. The former is unavoidable, but the latter is inexcusable.
Posted by Bill Hicks at 6:58 AM