Yes, Virginia, Our Attorney General is an Idiot 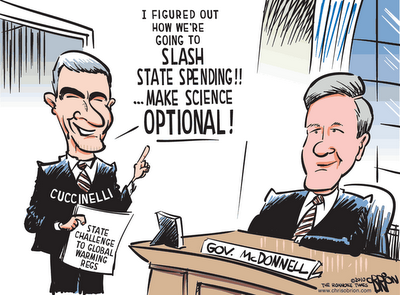 It's one thing for global warming denying conservative politicians to demagogue on the issue. That's to be expected from a bunch of self-interested greedheads who are bought-and-paid shills for the oil, gas and coal industries. But it's another thing entirely when their grandstanding starts to cause real world harm.

Like many other states, the Commonwealth of Virginia where I reside is financially strapped and has had to make deep cutbacks in vital services in recent years. Given this fact, you would think the the so-called "leaders" of the Old Dominion would be mindful of incurring any unnecessary or frivolous expenditures. Sadly, you would be wrong in that assumption.

In 2009, Virginia was a political bellwether state in the age of Obama when we replaced our Democratic governor with a hard right conservative Republican. Riding the new governor's coattails was a even farther right conservative named Kenneth T. Cuccinelli II (I guess "Junior" ain't good enough for this hayseed), who was unfortunately voted in as our new Attorney General. I say "unfortunately" not because I particularly care about his outmoded ideology, but because he is exactly the kind of political attention whore who can't resist throwing his weight around in inappropriate ways.

Like many on the far right, Cuccinelli is a obstinate global warming denier. Of course, environmental issues are not normally the purview of a state Attorney General, but for the fact that one of America's leading global warming researchers happens to be employed by the University of Virginia. I think you can see where I'm going with this. Here's the Washington Post with the gory details:


A judge has delayed making a decision on Attorney General Ken Cuccinelli II’s most recent request to Virginia’s flagship university for documents related to global warming.

Last year, Cuccinelli (R), a vocal skeptic of global warming, issued a civil investigative demand, essentially a subpoena, for documents from the University of Virginia. He is seeking five grant applications prepared by former professor Michael Mann and all e-mails between Mann and his research assistants, secretaries and 39 other scientists from across the country.

But a judge dismissed the subpoena. Cuccinelli re-filed a new, more specific demand pertaining to just one $214,700 state grant, but also appealed the ruling to the Supreme Court. The Supreme Court has not set a hearing date.

In an unusual step, U-Va. hired its own attorney and is fighting back, arguing that the demand exceeds Cuccinelli's authority under state law and intrudes on the rights of professors to pursue academic inquiry free from political pressure.

So to recap, because of one asshole with a partisan agenda that extends well beyond the normal duties of his office, the taxpayers of the State of Virginia are now forced to fatten the bank accounts of lawyers on both sides of a completely frivolous court case. The article does not mention this, but no doubt the cost to the state in legal bills has likely already far exceeded the relatively puny (by government expenditure standards) cost of the particular grant in question.

Make no mistake. Attorney General Cuccinelli II didn't file this suit because he believes Professor Mann committed grant fraud. He did it instead to spruce up his conservative credentials as the man who led the "crusade" against the evil climate scientists and their anti-American Exceptionalism agenda. Even if the dumb bastard manages to get the documents he subpoenaed, it's not like an anti-science cretin such has him is even going to understand what it is that he's reading.

For all that you do, Attorney General Kenneth T. Cuccinelli II, to burden the taxpayers of Virginia with onerous and unnecessary legal fees at a time of severe budgetary distress just to further your own narrow partisan political agenda, I hereby declare you to be a Real Attention Whore of Genius.
Posted by Bill Hicks at 8:39 AM