Cost of Family Health Care Coverage Doubled in the Past Decade 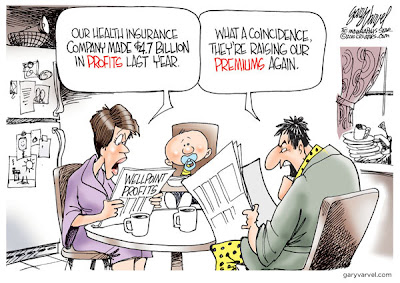 As I have said before on this blog, all that is wrong in America today can be summed up by the health care mess. Greed and avarice by the private corporations that control most aspects of the system has not only prevented the enactment of national health care, but has driven the costs of even basic medical treatments beyond the ability of the average citizen to pay. Just how bad things are is summed up in this brief article by Boise Weekly:


A new study out today by the Kaiser Family Foundation, a nonprofit research group that tracks employer-sponsored health insurance, shows that the average annual premium for family coverage through an employer topped $15,000 in 2011, an increase of 9 percent over last year.

Many businesses continue to cite the high cost of coverage in decisions not to hire new employees, dragging down an already-sputtering economy. According to the study, the cost of family coverage has doubled since 2001, when premiums averaged $7,061.

Keep in mind that the median household income in America is somewhere around $49,000. So that means it costs nearly a third of a family's annual income to provide that family with adequate medical coverage. And the cost just continues to rapidly spike upwards despite the corporate giveaway known as Obamacare.

By my back-of-the-envelope calculation, at the same 9% rate of annual increase in health insurance costs seen during this past year, the total cost of the insurance would more than double again by the year 2020, to just over $32,000. Given that incomes remain stagnant, and are at best likely to continue to be so as the Great Recession drags on, that means the cost of a family's health insurance would then consume nearly two-thirds of their annual income before taxes. Making matters worse, as the article states, many employers are not hiring due to high insurance premiums, a cruel Catch-22 for the uninsured and unemployed.

When a trend appears to be unsustainable, you can bet darn well that it is. At this staggering rate of increased costs, the American medical system is headed for collapse, and not in the distant future either. Unless something dramatically changes, I don't see how the system as currently constituted survives even the current decade.
Posted by Bill Hicks at 6:47 AM