Shockingly, Rick Perry Seems to Get One Right 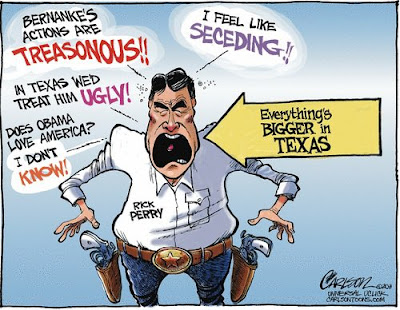 First all let me just say this about Rick Perry, he is the absolute worst form of American politician—a faux populist who uses inflammatory rhetoric to mask his unwavering obedience to his corporate masters. This is a man who holds public prayer meetings in response to a massive drought while loudly rejecting the scientific evidence supporting global warming. The fact that this charlatan so quickly and easily shot to the top of the polls among the Republican presidential candidates not only shows how bereft that party is of any form of leadership, but demonstrates just how utterly broken our entire political system is in the face of the most dire long term crisis this country has ever faced.

That said; this past weekend Slick Rick somehow managed to make what has perhaps been the most truthful statement to come out of any of the candidates’ mouths during this entire sorry ass campaign. Here is CBS News with the details:


Republican presidential candidate Rick Perry continued his attack on Social Security over the weekend, calling it a "Ponzi scheme" and a "monstrous lie" to younger Americans who should not expect to get back their contributions upon retirement.

"It is a Ponzi scheme for these young people. The idea that they're working and paying into Social Security today, that the current program is going to be there for them, is a lie," Perry said, according to the Houston Chronicle.

"It is a monstrous lie on this generation, and we can't do that to them," Perry told a crowd a The Vine Coffeehouse in Ottumwa, Iowa.

I gotta admit, I almost dropped my cup of coffee right into my lap when I read this, for never in a million years would I have expected any of the presidential candidates, especially Rick Perry, to say a set of words in the same order as they might have come out of my own mouth. The fact is that, superficially at least, Rick Perry is absolutely right about Social Security as currently constituted being a gigantic Ponzi scheme in which no one under the age of about 50 will ever likely see a dime from the program despite all of the money they have paid into it.

In my July 13th blog post “Why We’re Screwed (Part 3), The Social Trust Fund is a Lie,” I wrote the following:


In effect, the U.S. Government has been filling up the (Social Security) Trust Fund with IOUs that can only be cashed in at the cost of increasing the deficit. It’s like raiding your son’s piggy bank to buy cigarettes and leaving a promissory note. Do it often enough and there’s no cash left in there, and your son will be mighty disappointed when he tries to go buy that new toy he really wants.

Now you know why the politicos are suddenly so hot to trot to slash Social Security benefits. The program has gone from being a net plus, whereby they could use its surpluses to mask the size of the deficit, to being a net drain that is now directly increasing the deficit.

Don't worry, despite the truth about the trust fund I’m not going to let Little Ricky off the hook that easily. His words as they are phrased above might be the stuff of fantastic wet dreams for hard core libertarian types everywhere, but they leave unanswered one little nagging question: what exactly does the esteemed Governor Perry plan to do about the many millions of this nation’s senior citizens who currently depend on Social Security benefits to keep them alive?

What’cha gonna do, Rick? Throw Grandma and all of her elderly friends in the nursing home out on the street to freeze to death? I mean, wasn’t it you and your fellow Tea Party travelers who just last year were running around screaming, “Death Panels!!!” during the debate over Obama’s health care plan? Who’s setting up the death panels now, huh Ricky?

Let’s just be clear about one thing. Rick Perry isn’t slamming Social Security because he gives a flying fuck about the young people who will never be able to collect it. He’s doing so because he’s a hand puppet of the same wealthy elites who have been adamantly opposed to Social Security ever since the program was created back during the New Deal era. You see, prior to the 1930s, the vast majority of Americans were either filthy rich or dirt poor. There wasn’t much of a middle class to speak of, and that’s the just way the elites liked it.

But then the greedy fuckers went and crashed the global economy to the point where totalitarian revolutions started breaking out in places like Germany and Spain. By creating Social Security and other social welfare programs to blunt the worst effects of the Great Depression, Franklin Delano Roosevelt saved their sorry asses from the wrath of the masses, and all he got in return was spitefulness and hatred from his own class that has lasted to this very day. For most of that time they had to suck it up and keep quiet, but during the past 30 years they have figured out how to use slick politicians like Rick Perry to get the working and middle classes to vote against their own economic interests.

The real flaw with Social Security as designed, unfortunately, was the assumption that infinite economic growth in a finite world was possible. Now that we are rapidly reaching the point where the economy can no longer continue to expand due to natural limits, the program is doomed along with the rest of the welfare state. By robbing the Social Security “trust fund” to pay other government debts, all the politicos did was hasten the eventual day of its demise.

What this country really needs is leader who is willing to be honest about the need to power down our economy in a voluntary and orderly manner before we hit the brick wall of peak oil and resource depletion. Sadly, we are not likely to ever hear such words uttered by a national politician, and certainly not by the likes of the odious Rick Perry.
Posted by Bill Hicks at 6:52 AM